Associate Professor of Religion Chad Bauman’s attendance at a routine academic conference in Rome in December turned into the experience of a lifetime when the attendees were unexpectedly granted a private audience with Pope Francis. 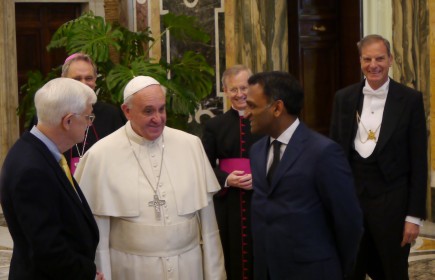 Bauman was at the Christianity and Freedom Conference to present his research on Hindu-Christian conflict in India. Midway through the first day of the two-day conference, conference organizers announced that participants had been granted a private audience with Pope Francis.

Bauman, who wrote about the experience in a blog posted here, said the Pope was smiling and joking almost the entire time. He posed for some photographs, interacted with the group a bit more, and then left the room. The Pope is most comfortable speaking in Spanish and Italian, Bauman writes, and the only thing he said in English the entire time was “Pray for me,” the phrase he most regularly uses in greeting.

“The entire audience lasted only a few minutes,” Bauman writes, “but even in that short encounter, many of the reasons why he has generated so much enthusiasm and hope, among both Catholics and non-Catholic observers, were readily apparent, and I am sincerely grateful to have had the opportunity to meet him.”