College of Pharmacy and Health Sciences students Kim Kraska and Stevan Tomich were the only pharmacy students from Indiana who met with federal lawmakers during National Association of Chain Drug Stores Day March 13 on Capitol Hill. 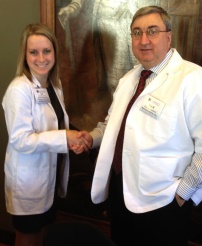 More than 400 community pharmacists, pharmacy executives, and pharmacy students—mostly from the east coast—participated in meetings with more than 80 percent of the entire U.S. Congress, helping them to better understand the value of pharmacy and how the profession is evolving. They connected with 136 of the 139 Members of Congress who serve on Congressional committees with jurisdiction on healthcare issues.

The event coincided with the introduction of H.R. 4190, which would amend the Social Security Act to designate pharmacists as healthcare providers under the Medicare program.  Under the bill, pharmacists would work to their full capability by providing underserved patients in the Medicare program with services not currently available to them, including immunizations, diabetes screenings and self-management education, cardiovascular screenings, and behavioral therapy, within the scope of state laws.