Jordan College of the Arts Bestows Its First Legend Awards 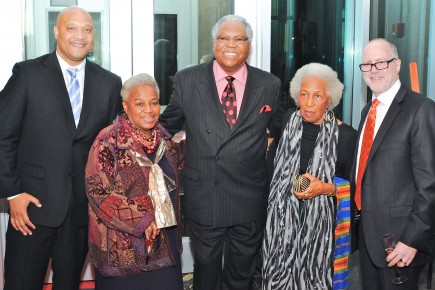 “Jordan College of the Arts (JCA) created the Legend Awards to honor individuals whose legendary work has had a deep and lasting impact on the artistic and social fabric of Indianapolis,” Dean Ronald Caltabiano said. “They aim to especially recognize the work of members of minority communities.”

In accepting their awards, Evans read a recent poem, Greene sang with his long time accompanist, and actress/storyteller Deborah Asante took the stage in a dramatic reading of one of Mari Evans best-known works, “I Am a Black Woman.”

Congressman Andre Carson, honorary chair, welcomed the attendees and stayed throughout the event, which more than 150 people attended.

Prior to the awards presentation, Caltabiano announced the launch of an Audience Development Task Force to be chaired by Williams. Composed of community members and representatives from the across Butler (including JCA faculty and staff and members of the JCA Board of Visitors), the task force will work through the next year, with goal of making recommendations to the dean on expanding JCA audience diversity in areas including age, ethnicity, and religion.