The Generation Rx initiative, powered jointly by College of Pharmacy and Health Sciences students and the Butler Student Association of Pharmacy, seeks to educate and raise awareness about prescription drug misuse both at Butler University and in the greater Indianapolis community. 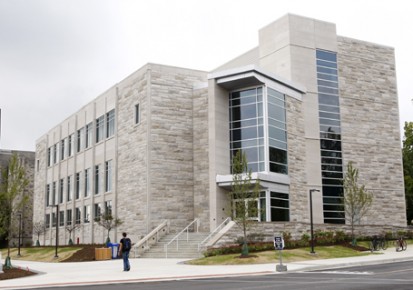 Thanks to a $6,000 grant from the Butler University Innovation Fund, Generation Rx students have been able to promote the cause through a variety of educational programs and awareness campaigns.

Adderall, xanax, and hydrocodone are the most commonly misused prescription medications among Indiana college students, according to the 2012 Indiana College Substance Use Survey.

Generation Rx coordinator Samantha Christie `15 said that, although some students are prescribed these medications for legitimate medical reasons, problems happen when they do not take the drugs as prescribed or the drugs are taken by people for whom they have not been prescribed.

A poster campaign was one of the largest of Generation Rx’s attempts to raise awareness; members of the organization hung fliers and posters with prescription drug facts around the Butler campus.

They hoped to address the lack of accurate information regarding the use of prescription drugs.

“People should be given the facts about misusing prescription drugs before being placed in a situation to misuse the drugs, in order for them to make their own decisions,” said Christie

Students also produced a video entitled “The Rx Trap” and had the opportunity to present this video at a national conference on the topic of prescription drug abuse at Ohio State University.

“In terms of promotions, our organization strives to create multimedia that uses original photography, video, and music to make our peers ask themselves what they truly know about prescription drug abuse,” said Stephen Small ’15, the visual arts specialist for this project.

Generation Rx invited Steve Moore to speak in the Reilly Room on how an addict’s brain works and the cycle of addiction. Moore is the founder of The Moore Institute in Birmingham, a facility that offers addiction recovery resources.

January 27-31 was “Butler University Drug Facts Week.”  Students held a drawing, in which 155 participating Butler students tried to win gift cards to the Butler Bookstore. To enter the drawing, students had to spin the wheel and correctly answer a drug facts question and/or play the street name-prescription name matching game in Starbucks.

“Out of Reach,” a documentary film that captures prescription drug abuse through the eyes of teenage users, was also shown. The film addresses a personal connection to medicine abuse and puts a face on this important issue, said Christie.

The reach of this initiative has not been limited to Butler’s campus. Generation Rx members have given presentations to local high school students, participated in a Drug Enforcement Administration (DEA) sponsored drug take-back day, and attended local health and wellness fairs.

Any Butler student with a prescription drug abuse problem is encouraged to seek help from Counseling and Consultation Services, located within the Health Center at the HRC. The service provides confidential counseling and resources to students for various struggles, including addiction.