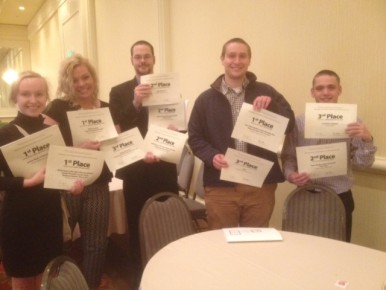 Sophomore Audrey Meyer won first place for best editorial cartoon for “Parking Ticket.” The judge wrote: “Made us laugh. Clearly and quickly gets the idea across, with a great facial expression. The cartoonist has a very bright future in cartooning.” 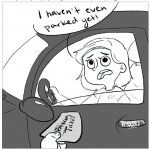 The Collegian won first place for best special issue on March 20, 2013, with the lead stories, “Butler Joining the Big East” and “Back in the Big Dance.” It was published the week after spring break (when a newspaper is not normally published), put together under deadline by six students: Jill McCarter ’13, Colin Likas, Marissa Johnson ’13, Austin Monteith, Lauren Stark and Madison Chartier. The judge wrote: “Great way to capitalize on big sports news by centering an issue around it.”

–Best non-deadline news story, “Packing Up and Moving On,” March 6, 2013, by McCarter, Likas and Johnson.

–Maggie Monson, best opinion column, for “You Don’t Have to Look Sick to Feel Sick.”