Dr. Grechesky Goes Out on a High Note

Forty-one years, seven presidents, six deans, countless performances. That’s the line on Bob Grechesky’s career at Butler, which ends this spring when he retires as director of bands. 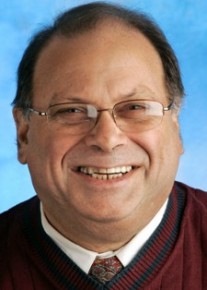 Grechesky joined the faculty in 1973, when Lilly Hall was barely a decade old, and Gallahue Hall and the Holcomb Building had yet to be built. One of his professors at the University of Wisconsin-Madison, former Butler Marching Band Director Michael Leckrone, had taught at Butler and told him about the job, which consisted of conducting the marching band and jazz band.

“I didn’t think I’d stay longer than a few years,” said Grechesky, sitting in a Lilly Hall office filled with memories and mementos of his decades at Butler, including probably 100 bobbleheads. “But it’s been a very good place to be.”

Growing up in Salem, New Jersey, near the Delaware border, Grechesky planned to become a lawyer or a psychologist. In high school in the early 1960s, he was a “crappy” trombone player. One summer he went to a summer music camp at Glassboro State College (now Rowan University) and found himself relegated to the last chair. “It was embarrassing,” he said.

The next year, the Beatles made their first appearance on “The Ed Sullivan Show,” and suddenly everyone wanted to be in a rock band—including a friend down the street who played euphonium. Grechesky asked to borrow the horn, which he describes as “a tuba with a thyroid condition.” That next summer, he earned euphonium first chair at the summer camp.

“I wasn’t ready to play that stuff, but there I was,” he said. “So I practiced eight hours a day. The camp was a three-week camp, and, by the time I got done, I was pretty good. I stuck with it. There’s a lot to be said for perseverance. Showing up is the majority of it. Show up, do the work, work hard at it.”

He went on to study at Rutgers University as an undergraduate and earn his doctorate at the University of Wisconsin in Madison. He taught in New Jersey and Wisconsin high schools, and at Madison Area Technical College while in grad school. But Butler was his first—and, it turns out, last—full-time university teaching job.

“I got to a place in my career where this [Butler] was very satisfying,” he said. “And Indianapolis is a great town. We sort of grew up with the town. And this is a great place to raise a family. This is a good school with great students and faculty, and I’ve always been able to fulfill my professional artistic needs here as far as making music and doing music.”

Butler Composer-in-Residence Michael Schelle said Grechesky has been a phenomenal asset for Butler as a professor, performer, and colleague.

“For 40 years, he has been ‘Radio Free Butler’—by far, the most flag-waving chamber of commerce representative for the University I have ever known here, or anywhere else,” Schelle said. “He put his heart and soul into the school and the young musicians, 24/7.”

But now Grechesky and his wife, Adrienne, a music teacher in Indianapolis Public Schools for the past 41 years, will be moving to Marietta, Georgia, to be near their daughter, son-in-law, and two granddaughters.

Grechesky expects to do a lot of chauffeuring. He also plans to play in the Cobb County Wind Ensemble and work on a critical addition to a composition called “A Chant from the Great Plains,” which won the first National Band Association composition contest in the 1920s but has since been lost through time.

What he’ll miss most about Butler, he said, are the students. He’s proud of the number of students who’ve gone on to successful careers in music, including Bob Wood ’74 (trumpet in the Indianapolis Symphony Orchestra), Steve Eggleston ’74 (professor of music at Illinois Wesleyan University), and Matt Henry ’96 (colonel and conductor in U.S. Air Force band).

“Some of my best friends are former students,” he said. “Over the years, you establish those relationships. That’s the thing. That’s the bond.”