Alex Still graduates in May with a bachelor’s in dance pedagogy and French, along with a history minor. And she’ll be using all she learned when she heads to France this fall as recipient of the Fulbright French Government Teaching Award, sponsored by the French ministry of education. 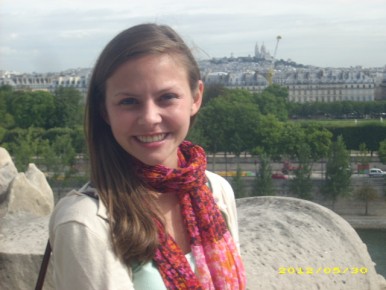 Still, who came to Butler from Williamsburg, Virginia, will leave for France in mid-September and spend the school year teaching English to French middle and high school students in the northern France city of Lille.

“It’s been awesome to be in the dance program,” said Still, Butler’s seventh Fulbright recipient in the last four years and the second this year, “but also to be able to have other interests and not be restricted to one major.  Because I got to do all of this, I feel like that’s why I get to go to the next level. Following the Butler Way has truly gotten me where I am today.”

In October 2013, Still began the process of applying for the Fulbright, working with Rusty Jones of the Center for High Achievement and Scholarly Engagement. She received the good news on April 1. She is the third winner of this award in Butler’s history, following Courtney Campbell (now Rousseau) in 2003 and Adam Weaver in 2011.

For Still, the French Government Teaching Award means a return to France. She studied in Dijon the summer after her sophomore year and also has visited Paris on a vacation.

“I hope to stay over there for a few years at least,” she said.

All applicants for the Fulbright are required to propose a side project that they will do in addition to teaching English. Still proposed bringing the concept of the Butler Community Arts School to France by volunteering in a school that needs arts instruction. So as part of her time in Lille, she will not only teach English but dance as well.

“I want to share what I’ve learned through my dance education,” she said.