Six Butler University alumni, including a professor emeritus, were honored May 3 at the annual Alumni Recognition Dinner for extraordinary professional achievement and service to the University and their communities. 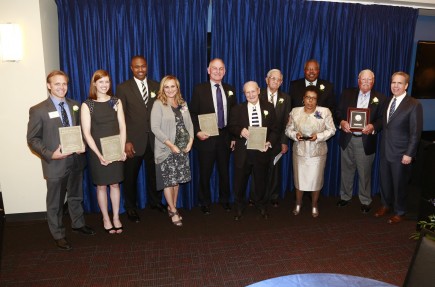 Awards and honorees were:

This year’s awards ceremony was held in Clowes Memorial Hall. More about the recipients and the awards follows:

The Butler Medal is the highest honor conferred by the Butler University Alumni Association. It recognizes individuals for a lifetime of distinguished service to either Butler University or their local community while at the same time achieving a distinguished career in their chosen profession and attaining a regional or preferably a national reputation.

As a student, Sellick was involved with the band, Kappa Kappa Psi band honorary, and Delta Tau Delta fraternity. He earned a degree in economics.

He was married to Butler graduate Jacqueline Blomberg Sellick’44 until her death in 2012. She earned a bachelor’s degree in English and was a member of Alpha Chi Omega.

Sellick served in the U.S. Marine Corps in Japan during World War II and as a major in the Marine Forces Reserve during the Korean War. He was a charter member of Woodland Country Club and active in Kiwanis and the American Legion.

The Butler Service Medal recognizes emeriti faculty or retired faculty or staff for a lifetime of distinguished service to either Butler University or their local community while at the same time achieving a distinguished career in their chosen profession and attaining a regional or preferably a national reputation. It is further understood that all recipients will have had in the course of their lifetime a profound influence on the future course of Butler University.

Roger Boop was a Butler University College of Education (COE) faculty member from 1968–2012, specializing in educational foundations and middle school teacher education. He served for several years as Associate Dean of the College and two terms as Interim Dean. He was an effective, respected teacher and supervisor for a multitude of students in COE’s Middle/Secondary program.

He is the author of Fulfilling the Charter: The Story of Education at Butler University and More… written to mark the College of Education’s 75th anniversary.

A driving force in the early years of the Indiana Middle Level Education Association (IMLEA), he was the association’s Executive Secretary for more than a decade. He also served for over a decade as treasurer of Phi Delta Kappa, international education society as well as many years of involvement in Kappa Delta Pi, the international education honorary. He is a member of the Board of Visitors for the College of Education and has continued to serve (since 1980) as platform marshal for University commencements and other ceremonious events.

The Robert Todd Duncan Alumni Achievement Award is presented to an alumna or alumnus whose class graduated at least 15 years prior to the presentation of the award. It recognizes personal and/or professional achievement which brings honor and distinction to the University and individual attainment and/or contributions for the betterment of society.

Jay Love is CEO and Co-founder of Bloomerang, an Indianapolis-based software firm specializing in technology tools for fundraising and communication. Bloomerang is the fourth technology business he has helped found and lead over the past three decades, serving thousands of clients in the non-profit and philanthropy sectors.

Jay and his wife, Christie, co-chaired the Indianapolis YMCA 2011 capital campaign. They have three children and three granddaughters. Jay holds a bachelor’s degree in business administration from Butler.

The Katharine Merrill Graydon Alumni Service Award is presented to an alumna or alumnus whose class graduated at least 15 years prior to the presentation of the award. It recognizes a long-term commitment of outstanding service to the University.

After working many different jobs to pay for his education, Eldon Palmer earned an education degree from Butler. Palmer taught school in Jamestown, Indiana, and then started selling used cars. He opened a Dodge dealership in 1956, and branched into the sales and service of Dodge and Kenworth trucks in 1965. His Kenworth dealership now encompasses sales, service, and leasing operations in Indiana, Ohio, and Kentucky.

Although retired, Palmer still has an active interest in the businesses he developed which include Pebblebrook Golf Course in Noblesville, Indiana¬––the site of an annual golf outing for Butler athletics.

He is a Trustee Emeritus of Butler University and an Indiana Sagamore of the Wabash. He and his wife, Elaine, were the recipients of the 2008 Ovid Butler Society Mortar Award. The first President of Crime Stoppers of Indiana, he provided important leadership and backing to the Marion County Motorcycle Drill team, Wheeler Boys and Girls Club, and the 100 Club, which helps families of fallen Indianapolis Police Department officers. He has been a member of the Optimist and Exchange clubs of Indianapolis, Millersville Masonic Lodge, and Murat Shrine Club, attaining the Scottish Rite 33rd degree.

Eldon and Elaine Palmer have been married 63 years. They have four children, 13 grandchildren, and four great-grandchildren.

The Hilton Ultimus Brown Alumni Achievement Award is presented to an alumna or alumnus whose class graduated less than 15 years prior to the presentation of the award. It recognizes personal and/or professional accomplishment which brings honor and distinction to the University and individual attainment and/or contributions for the betterment of society.

Ed Carpenter is the 2013 Indianapolis 500 pole winner. He owns and drives for Ed Carpenter Racing, which he started in 2012. He will be behind the wheel of the No. 20 Fuzzy’s Ultra Premium Vodka Chevrolet for six IndyCar Series oval-track events this year, and he will direct driver Mike Conway in 12 road and street races. Conway recently won the Long Beach Grand Prix.

Carpenter received a marketing degree from Butler in 2003, the same year he earned his first IndyCar race start. Since then, he has earned two series wins, two poles, and several top-10 and top five finishes. Last year, he placed fifth in final IndyCar oval points standings.

Christina Fugate is an Attorney at Ice Miller LLP in the firm’s Litigation Group, where she concentrates her practice on real estate, securities, product liability, franchise, and competitive business litigation. Fugate has been recognized as a Super Lawyers “Rising Star” for the past three consecutive years.

She is admitted to practice law in the state of Indiana and in the U.S. District Courts for the Northern and Southern Districts of Indiana. She is a member of the American Bar Association, Indianapolis Bar Association, and IndyCREW, an affiliate of the national CREW (Commercial Real Estate Women) Network.

Christina is married to Craig Fugate and they have a two-year old son, Dylan.

While earning a bachelor’s degree in accounting at Butler, Chris played basketball and earned the Horizon League Coleman Medal of Honor for 1996. He completed an MBA from Harvard Business School in 2000.

Nicole earned a bachelor’s degree in pharmacy from Butler, and is a member of the American Pharmacists Association. She is employed as an Advisor in Clinical Development Innovation for Eli Lilly and Company. She is also a past member of the Alumni Association board (2009–2010).

The Miskels have supported Butler with gifts to the Butler Fund, Blue Team, Alumni Scholarship, the College of Business, and the Campaign for Hinkle Fieldhouse. Chris and Nicole are also supporters of United Way and the Baxter Political Action Committee.

The Miskels enjoy family time with their children Sage (age 6) and Mace (age 4), and are expecting a baby boy this summer. They love to travel and closely follow Butler basketball. Chris also is a fan of The Ohio State University football and basketball teams.

Butler Trustee Emeritus and civic leader Clarence Crain has been a Program Director in the Education Division of Lilly Endowment Inc. since 2006. His previous career with General Motors Corp spanned 30 years, including two five-year stints as Area Manager in the Indianapolis and Marion pressrooms, helping direct plant operations of 2,500 and 1,700 employees, respectively.

Clarence graduated from Shortridge High School, where he was a member of the All-Star Indiana High School basketball team. He played basketball at Butler, earning Most Valuable Player recognition and initiation to the Athletic Hall of Fame in 2004. A Butler Trustee from 2000 to 2006, he was a charter member of the Minority Alumni Council and served on the Alumni Association board and College of Business Board of Visitors.

He has held several offices with 100 Black Men of Indianapolis and continues as a team mentor; the group named him their 1999 “Man of the Year.” He received honors from the Association of Fundraising Professionals (AFP), the Center for Leadership Development for Business Achievement (General Motors), and the Butler Medal (Butler University).  He has served on boards for Maple Crest Civic Association (President); Public Works, Indianapolis City-County Council; and United Way Community Service Council. Clarence was a high school basketball official for 19 years and officiated in the 1993 state finals.

Fabiola Crain is a retired speech and language pathologist with over 35 years of experience in education, most of it with the Wayne Township School Corporation. A native of Nashville, Tennessee, she graduated from Tennessee State University in 1976 and is a member of Alpha Kappa Alpha Sorority.

Clarence introduced Fabiola to the “Butler Way” in 1999. She shares his passion for Butler, through philanthropy and sitting behind the bench at Butler Bulldog basketball games. She enjoys traveling, horticulture, and collecting Christmas decorations.

The Crains have three children and one grandchild. They are active members of Mount Carmel Baptist Church.