Forty Butler students are taking their psychology research on the road to the Association for Psychological Science (APS) national convention May 22–25 in in San Francisco. 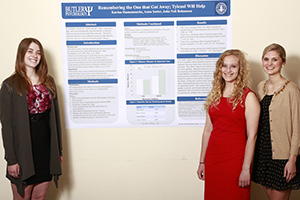 From left, Beth McGlone, Karina Hamamouche, and Emily Lauth with their poster for the Association for Psychological Science convention.

Accompanied by seven faculty members, the students will present posters at the conference, describing research they’ve conducted at Butler. They will also hear about cutting-edge science and rub elbows with leading psychology authors and scholars.

For the third consecutive year, Butler is among the top five schools in the number of students presenting posters during the conference, and the only private school in the 2014 top five. University faculty and students make up about 87 percent of the 4,500 expected attendees; representatives of government agencies, non-profits, and research institutes and businesses will also be on hand.

“Our students are special,” said Psychology Department Chair Robert Dale, “not only because they’re attending conferences, but they’re also presenting research they proposed and carried out with a faculty mentor. Most other APS presenters are graduate students or university faculty, so our undergraduates are getting experiences and attention they normally would only get as graduate students.”

Many of the Psychology faculty take students to national and regional conferences annually, and often use some of their research grant funds to help defer student expenses to attend conferences, Dale said. Butler’s Office of the Provost has paid some of the students’ travel costs for the APS conference.

APS will host 17 poster sessions in San Francisco, featuring an average of 130 posters each.

Faculty coach their students on their presentations, and guide them in creating the 4-foot-by-8-foot posters that detail their research methodology and findings.  But the mentors will let the students do the talking during the 90-minute poster sessions, when other conference goers look over the work and ask questions.

“The people who view your posters ask, ‘Did you test this? Did you think of that?’ ” said recent graduate Karina Hamamouche ’14 of Westfield, Indiana. “Their feedback helps enhance your studies.”

“The students come back from conferences with more confidence,” Dale said. “People have taken their research work seriously.”

Throughout her undergraduate years, Hamamouche researched memory with Professor Neil Bohannon. In San Francisco, she and sophomores Beth McGlone and Emily Lauth will present a poster on their study of cognitive psychology, memory, and social rejections.

At his first APS conference, senior Ian Katz of Buffalo Grove, Illinois, will present a poster on “The Ebb and Flow of Performance Feedback,” He and classmate Chris Thompson worked on the research with Assistant Professor Alison O’Malley ’04.

“A lot of people we read about will be there,” Katz said. “It’s a unique opportunity that will help my plans to go to graduate school.” As practice, Katz presented at the annual Butler Undergraduate Research conference in April. He was chosen to participate in more research during Butler Summer Institute 2014.

“Ian made some important suggestions and tweaks on the research, so we thought it would be appropriate for him to be second presenter with Chris,” said O’Malley.  Being encouraged to attend conferences is a way Butler recognizes students “who make the greatest effort,” she added.

At major conferences, Butler people get to hear presentations by experts who’ve written textbooks and other class sources, she said. “You get a bit of a leg up on the state of the science at conferences. I’ve had students bring me conference programs, so we could talk about issues presented in class.”

Hamamouche speaks with awe in her voice when she recalls a previous APS conference where she met Beth Loftus, a noted expert in human memory. O’Malley was a Butler senior when she attended the 2004 APS conference, and presented a poster on research she conducted with Professor, now Provost, Kate Morris. But, O’Malley’s conference highlight was an elevator ride she shared with Albert Bandura, a leading scholar on social learning and aggression.

“He was such a giant in my textbooks,” O’Malley said. “But he was actually small in physical stature, like I am. I said, ‘Hello, Dr. Bandura,’ and he was very kind.”

Since joining the psychology faculty, O’Malley said, she has noticed a shift in departmental thinking from her own student days. “We get more students involved in research earlier,” she said.

In recent years, close to two-thirds of all Butler psychology graduates have gone on to graduate or medical school. Presenting at major conferences as students offers them an advantage in applying to those programs, Dale said.

Hamamouche, who begins graduate studies in developmental psychology at Boston College this fall, said her research and conference experiences definitely impressed those reviewing her application to the graduate program. They also came in handy during an internship she completed last summer at Johns Hopkins, during which she and other undergraduate interns were required to develop and present posters.

“I had made posters a bunch of times,” Hamamouche said. “The other interns hadn’t.”

“Butler faculty are very involved with their students,” Hamamouche said. Their efforts to get students to conferences, she added, show “how much our faculty care about us, how much they want us to learn.”