Vote to Earn Her Foundation a National Jefferson Award

After her young friend Max died of cancer, Butler junior Liz Niemiec created a foundation to grant “little wishes” to children hospitalized with cancer across Indiana.  Since 2010, her Little Wish Foundation has raised more than a quarter-million dollars and fulfilled more than 240 wishes for young patients. 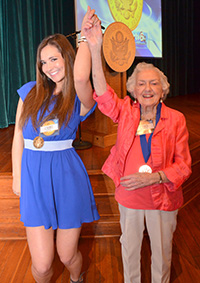 The foundation is now seeking social media votes to become a national finalist in the Jefferson Awards Lead 360 Challenge. The contest offers cash awards to outstanding service projects developed by individuals under age 25 to benefit children.

See a video of Niemiec and vote for her at https://lead360.jeffersonawards.org/challenge/. Visitors can vote once every 24 hours through midnight on Wednesday, May 21.

Niemiec was 17 and living in Michigan City, Indiana, when she met 4-year-old Max.He had a rare kidney cancer called Wilm’s Tumor. She organized a bake sale to raise money for his treatments, and was impressed that, up through his death two years later, Max never seemed to complain.

“Before he passed away, his little wish was to get a dog, and I saw what a huge impact that small thing made in his life,” she said. “So, I wanted to do the same for other kids fighting cancer.”

Under the motto “Live Life to the Max!” the Little Wish Foundation provides toys, computers, games, or other items requested by children being treated for cancer at hospitals in Fort Wayne and South Bend, Indiana, as well as Riley Hospital for Children and Peyton Manning Children’s Hospital in Indianapolis. The gifts raise the spirits of patients’ entire families, whose energy and finances are often stretched thin from caring for their children.

“Even if your donation is small, even if you’re helping in a small way, it makes all the difference,” Niemiec said. “It’s the little things in life that we should care about and focus on.”

While studying for her Arts Administration degree at Butler, she still has found time to organize several fundraising events a year in northwestern and Central Indiana.

The top-5 finalists for the Jefferson Awards Lead 360 Challenge will be announced on May 22, and will be brought to Washington, D.C., in June for the national award ceremony. More than 5,000 projects were nominated for this year’s challenge.