Why Is It Funny? Professor Bungard Will Tell You

The writer E.B. White famously said that explaining a joke is like dissecting a frog.

“You understand it better,” he said, “but the frog dies in the process.” 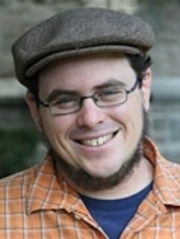 Butler University Associate Professor of Classical Studies Chris Bungard thinks analysis of humor doesn’t have to be that way. He’s received a National Endowment for the Humanities (NEH) grant to develop a course called “Why Is It Funny” that will help students think about the role that comedy has played in the human experience from antiquity to the present day.

Bungard said the class will examine issues such as how laughter plays with our perceptions, the appeal of subversive humor, whether comedy is “a guy thing,” the role of laughter in civic discourse, and whether we can laugh at war.

The class will be more than laughter, of course. The goal of first-year seminar classes is to help students build foundations in critical reading, writing, and speaking. There’ll be papers to write, lots of readings, and a final project that will ask students to develop either a five-to-seven-minute stand-up routine in the style of a non-American comic tradition or to create a five-to-seven-minute period comedy piece using the tools of digital storytelling.

“As students delve deeply into these diverse materials, they will formulate for themselves theories of what underlies the attraction of comedy,” Bungard wrote in the proposal for creating the course. “We will ask ourselves: Is there such a thing as universal comedy? To what extent is comedy bound up in cultural norms? Is comedy inherently antagonistic? Or does the humor of comedy promote inclusive communities?”

The NEH gives grants to develop courses that promote the value of the humanities. The classes have to address an enduring question, such as: What’s the good life? What is justice? And the subject matter should look across the globe or across time—ideally, both. Bungard’s yearlong first-year seminar course, scheduled to debut in fall 2015, will take a wide view of comedy from ancient Athens and Rome, Renaissance Europe, the Middle East, Japan, Nigeria, South Africa, and modern America. It will intentionally make use of comedy from different genres, including plays, films, traditional fables, and comic strips.

In creating the class—and process that is still ongoing—Bungard said he has found himself asking questions like:

-Are comedy, humor, and “funny” the same thing?

-When we say something is funny, do we mean the same thing every time?

-Can we use humor to turn something terrible into something laughable and create a kind of power over the evil?

Even the question of whether dissecting a joke kills the humor led to other questions, such as: If that is the result, then why? What happened?

For the answers to those questions and others, you’ll have to take the class.

Tagged with → Chris Bungard • National Endowment for the Humanities • Why Is It Funny
Please share it!