Col. Michael J. Colburn, a 27-year veteran of the United States Marine Band and for the past decade Director of the military band known as “the President’s Own,” has joined the Butler University faculty as Director of Bands.

In that capacity, he will oversee the Butler Wind Ensemble and the Butler Symphonic Band. He also will teach a section of basic conducting this fall, as well as a euphonium student and several master’s conducting students. 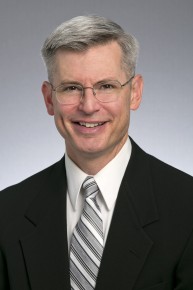 Colburn will make his Butler conducting debut Sunday, September 21, at 3:00 p.m. during a School of Music showcase concert at the Howard L. Schrott Center for the Arts. Call 317-940-2787 for ticket information.

Colburn’s time with the Marine Band included nine years as a euphonium player, eight as an Assistant Director, and 10 as the Director. The band’s mission is to perform for the President of the United States as well as the Commandant of the Marine Corps.

The 49-year-old Vermont native attended the Crane School of Music at the State University of New York’s Potsdam campus for two years, then changed majors from music education to music performance and transferred to Arizona State University.

Colburn auditioned for the Marine Band in December 1986 and was hired while working on his master’s in bass trombone and euphonium performance at Arizona State University. During his years with the band, he also finished a master’s in conducting at George Mason University.

Colburn said Butler music students will be able to learn from his experiences, including starting at a small school, changing majors, and diversifying his career options.

“Achieving a life and career in music is getting to be more and more challenging,” he said. “That doesn’t mean there won’t be opportunities, but young people will have to be more creative and entrepreneurial than they’ve had to be in the last couple of decades. The idea of stitching together a career from a couple of different jobs and opportunities is something they may be required to do. But if you have that burning desire to make music, I’m convinced that you will still find a way to make it work.”

The deal to bring Colburn to Butler began to take shape about three years ago when Dan Bolin, his longtime friend and at the time the Butler University School of Music Chair, mentioned that Robert Grechesky, Butler’s longtime Director of Bands, would be retiring in 2014.

“This is a great opportunity for Butler,” Bolin said. “There’s never been a former director of the Marine Band who’s become a college professor. There have been former directors who’ve taught in an adjunct capacity, but to be a full-time professor is great for Butler and our students—and for Mike to have a second career with some new challenges in a new community.”

In December, Colburn will receive The Midwest Clinic Medal of Honor for 2014 in recognition of achieving highest artistic standards on the world stage and his successes in bringing music to wide segments of society. The Medal of Honor, given by the Midwest Clinic, an international band and orchestra conference, recognizes conductors, educators, performers, composers, and others who have provided unique, distinguished service to music education and have had distinct influence on orchestras, bands, and related performance media.