Marianne Richardson ’14’s fascination with Latin America began at 12 when she visited Monterrey, Mexico, with her father, a doctor who makes service trips to that region.

At 15, she spent time interacting with the indigenous people of Guatemala and found herself mesmerized by the Mayan language Quechua. 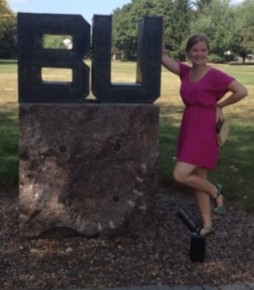 “These people have a culture that I had never seen or heard about before,” Richardson said. “There is no other culture in the world like it.”

Trips to Peru and Cuba followed, and now Richardson will put her passion to work as the first Butler student to be selected for the prestigious Princeton in Latin America (PiLA) fellowship in Uruguay.

Richardson, who graduated in May with a degree in International Studies and Spanish, leaves on September 9 for Montevideo, the large metropolitan capital of Uruguay, which will be her home for the next 10-12 months. She will work in institutional development at a nonprofit education center for children and adolescents called Providencia.

Richardson said she is both shocked and grateful for the once-in-a-lifetime opportunity.

“I couldn’t believe it,” she said. “It was a huge relief knowing that someone wanted to invest in me—and with me in this particular region. It’s great to be recognized for all of the work I’ve put into knowing this country. It feels like a gift.”

Richardson decided to apply for the fellowship last summer after hearing about it from a friend while they were studying abroad in Cuba. She worked with Rusty Jones, Director of Undergraduate Research and Prestigious Scholarships, from Butler’s Center for High Achievement and Scholarly Engagement to craft a competitive application.

Richardson was offered the fellowship, and Jones said he could not be more thrilled for her.

“It’s going to lead to all sorts of great things for her,” Jones said. “She will be a part of an extensive network of PiLA scholars essentially forever, and if I were her, I’d put it first thing on my resume.”

According to Jones, most past PiLA fellowship recipients have come from prestigious institutions and Ivy League schools. He said he is excited about how this will impact Richardson and Butler.

“Winning this selective fellowship is fantastic because it speaks so highly of Marianne,” Jones said. “But it’s important to note that this is also an amazing thing for Butler. It shows that we are right up there.”

After a rigorous application and interview process, Richardson said she looks forward to finally embarking on her trip and speaking Spanish with the Uruguayans. Richardson is fluent in Spanish and conversational in Portuguese.

“I really can’t wait to be speaking Spanish all the time,” she said. “I’m so excited about the Spanish and interacting with the people there.”

She said she hopes to continue traveling the world when she finishes her fellowship and has an active application to serve as a member of the Peace Corps.

Jones said he looks forward to seeing what Richardson accomplishes in Uruguay and in the future.

“She’s a fantastic student and an amazing person,” Jones said. “I have no doubt she’ll be a big success.”