Butler Newsroom > Butler Home Page > For All the Dogs We’ve Loved Before, A Memorial
Officer Davis: ‘A Hero Who Made the Ultimate Sacrifice’ Bobby Fong Remembered for His Many Contributions to Butler

For All the Dogs We’ve Loved Before, A Memorial

Butler’s beloved bulldogs got their final resting place on Friday, a granite, brick, and bronze doghouse outside Hinkle Fieldhouse where the remains of Blue I, Blue II, and all future mascots will be laid to rest. 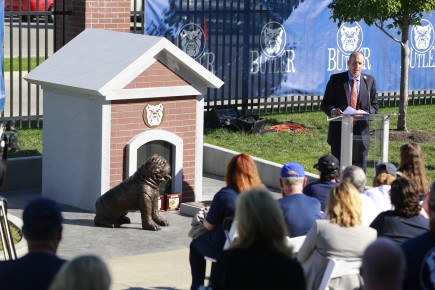 Michael Kaltenmark said the bulldog memorial is “a timeless relic.”

The University dedicated the dog house/columbarium (urn storage) and bronze bulldog sculpture with a ceremony that honored the dogs and blessed the current mascot, Trip.

“By working in cooperation with some very important people, what I believe we have constructed here is a timeless relic, built to last, which serves as a point of pride and appropriate tribute to the lovable Butler Bulldog,” said Michael Kaltenmark, Director of External Relations and the owner of Blue II and Trip.

Donors to the memorial included the Class of 2013. Michael Couch, president of the class, said the Live Bulldog Mascot program came into its own during his class’ years as Butler students. Media made a star of Blue II during Butler’s 2010 and 2011 NCAA Final Four runs, and Kaltenmark built on Blue’s fame with innovative blogging and other social media, countless personal appearances, and a children’s book, but Kaltenmark and Blue “always remembered that their first fans were the students and alumni of Butler.”

“The Class of 2013 hopes this memorial stands as a testament to the determination, loyalty, and pride of all Butler Bulldogs—four-footed and two-footed—for many years to come,” he said.

Butler President James M. Danko said the bulldogs are more than just mascots—they’re family dogs that comfort our students when they’re homesick, celebrate birthdays across our community, play starring roles in videos and children’s books, and help us cheer on our teams.

Blue I, who died in May, Blue II, who died in 2013, and Trip all have served as a unifying force across our campus and our city, he said. Everyone, Butler alum or not, loves our Butler bulldogs.

“In this wonderful community of learning, we will be forever grateful for the things our bulldogs have awakened in us: above all, that special happiness that can only come from loving—and being loved—by an animal,” Danko said. “May Blue I and Blue II rest in peace, and we look forward to Trip having a long and happy tenure.”