More than 70 rambunctious Girl Scouts poured into the cramped basement of St. Mark’s Episcopal Church in Plainfield on Friday evening to discuss a topic important to the health of young Daisies, Brownies, Juniors, Cadettes, and Seniors—prevention of prescription drug abuse. 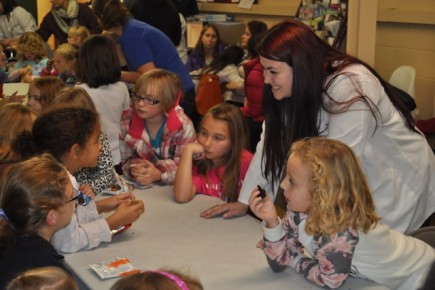 The kindergarten to early high school-aged girls of the Wagon Trails Service Unit of Girl Scouts of Central Indiana crowded around tables with Butler University students from Generation Rx, the organizers of the program, to learn the facts about prescription drugs. Generation Rx is a student-run initiative of the Butler Student Association of Pharmacy and students of the Butler College of Pharmacy and Health Sciences who seek to educate and raise awareness on the proper use of medication.

The scouts were divided into small groups by age and spent time rotating to different stations. One station, for the younger girls, featured pictures depicting the differences between candy and prescription medicine. Another table hosted a lively game of two truths and a lie, in which girls were asked to identify the false statement about prescription drug use.

The most popular station featured a science experiment, in which girls could compound their own lip gloss. Butler students assisted scouts as they heated and mixed petroleum jelly and flavored Kool-Aid packets to make their own Generation Rx-labeled canisters of colorful and tasty lip gloss to take home.

But they also wanted to impart a message: If a prescription doesn’t have your name on it, don’t touch it.

“These girls aren’t getting it from anywhere else,” Harris said. “When you think of drug abuse, you think of older girls. You never think of how prescription drug abuse can affect the younger girls. That’s why this is so great for them to hear.” 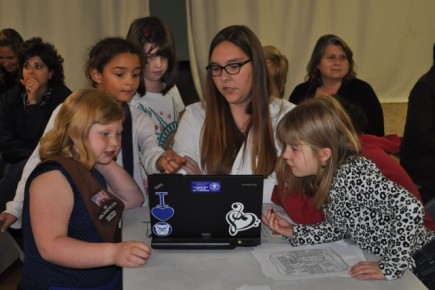 Ainsley Paton ’16 talks with girls about the difference between candy and medicine.

Meadows said the event also served to introduce girls to different careers in health and science, such as pharmacy. The Girl Scouts learned about the Butler Pharmacy program and how pharmacists are vital to the health industry through compounding and influencing the prescription of medication.

Spreading the message of health, safety, and science to young Girl Scouts hits especially close to home for Meadows, a Lifetime Girl Scout who has been an active member since kindergarten.

“Girl Scouts works to make you the best girl you can be, whether it be through health, education, or community service,” Meadows said. “We are just adding to that message. The girls can go out and help their community now, tell their friends what they learned about prescription drug safety.”

Deana Potterf, Chief Communications Officer of Girl Scouts of Central Indiana, said the Girl Scouts are committed to ensuring the health and well being of its members in the decisions they make, and the Generation Rx students provided scouts with another tool for healthy living.

“Butler University has an outstanding reputation when it comes to its Pharmacy program,” Potterf said. “Girl Scouts is really proud to work with them on this program.”

At the end of an energy-packed evening, Meadows slowed down to ask the girls a final question: After tonight, how many girls are interested in potentially entering the field of science?

At least three-quarters of the squealing girls in the room raised their hands, their fingers still sticky from mixing lip gloss.