Abdul-Rahman Peter Edward Kassig, who studied political science at Butler University in 2011 and 2012, was remembered during a memorial service held November 23 at Clowes Memorial Hall. More than 800 people attended. (The recorded video of the ceremony is available at www.butler.edu/live.) 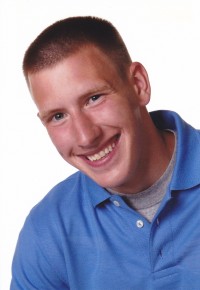 Then known as Pete, he graduated from North Central High School in 2006. Upon graduation, he enlisted in the U.S. Army and served as a Ranger. Deployed to the Middle East, he served his country well and returned home a decorated veteran with an Honorable Medical Discharge.

Upon his return, he attended Hanover College, and also trained as an EMT before transferring to Butler University. A spring break journey to Beirut, Lebanon, planted the seeds of a calling that led him to forsake the halls of academia for a life serving those in desperate need.

His initial efforts included providing volunteer medical services to those fleeing the turmoil in the region. He soon realized that people needed more and founded his own NGO, Special Emergency Response and Assistance (SERA), to quickly provide much-needed food, cooking supplies, clothing, and medical supplies and services. In addition, he taught trauma care skills to dozens of civilians. Lives are being saved today as those skills live on.

His life among the Syrian people led him to explore Islam and, with the help of his friends, he began a journey that would lead him to embracing the Islamic faith.

On October 1, 2013, while riding in an ambulance on a medical mission to Deir Ezzour, he was abducted and taken hostage, setting off a chain of events that drew worldwide attention to the plight of the Syrian people. Initially held in the same cell as a Muslim cleric, he converted and chose the name Abdul-Rahman, which means “Servant of the Most Merciful.” In mid-November 2014, he laid down his life for the Syrian people he came to know and love.

Greeting him on the other side are his grandparents, the Reverend Jerry Hyde and Betty and Ed Kassig Sr.

He will be fondly remembered by friends around the world.

In lieu of flowers, the family requests that donations be made to the Syrian American Medical Society at sams-usa.net or 3660 Stutz Dr. #100, Canfield, Ohio 44406.