One year ago, we introduced the Butler 2020 Vision—the culmination of two years of discussion and feedback from Butler students, faculty, staff, and alumni. Twelve months later, we have made major strides and are poised for great achievement in the months and years to come. I would like to begin the year by sharing updates on key accomplishments and opportunities—all made possible by your support and engagement, and that of the entire Butler community. 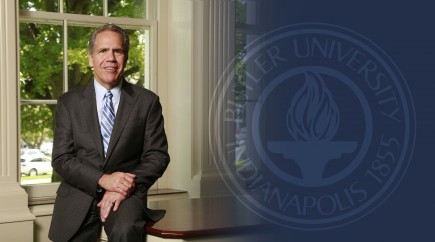 Academics
The first platform of the Butler 2020 Vision outlines our strategy to distinguish Butler through innovative programs and a strengthened commitment to community engagement, experiential learning, and international education. 2014 brought exceptional recognition of our work in these areas, as U.S.News recognized Butler as one of the top schools in the country for undergraduate education that supports student success. Butler—listed among the nation’s best for internships, undergraduate research, service learning, study abroad, and first-year experience—was one of only three universities in the United States recognized in five or more categories, and was recognized in more categories than all other Indiana schools combined.

The New Year has already brought further affirmation of Butler’s efforts, as the Carnegie Foundation for the Advancement of Teaching recognized Butler with its Community Engagement Classification, which acknowledges colleges and universities that have gained national distinction by developing mutually beneficial partnerships with local organizations and surrounding communities.

These accolades reflect the exceptional work of faculty and staff across the University. In the year to come, we will continue to build upon these accomplishments as we launch new programs, expand online offerings, continue to fund innovative initiatives, and further distinguish Butler within a crowded higher education landscape.

Health and Safety
There is nothing more important than the health and safety of our students. With the topic of sexual violence front and center at college campuses around the country, Butler has taken proactive steps to build a Community of Care. In 2014, we expanded student programming focused on education and prevention, collaborated with government stakeholders and peer institutions, and worked to improve Butler’s sexual assault policies, procedures, and enforcement efforts.

Last spring, we announced plans to create a commission of students, faculty, and staff to build upon current efforts to stop sexual violence at Butler. The Presidential Commission on Sexual Assault—which includes representation from students, faculty, and staff from across the University—will meet actively throughout 2015 and provide Butler’s leadership with ongoing recommendations to improve assessment, education, and prevention.

At last year’s Convocation, it was inspiring to watch our incoming students stand together and take the #ButlerPledge to care for one another and keep each other safe. I am proud of our community’s efforts to uphold these commitments and look forward to a safe and healthy 2015 at Butler University.

Leadership
We are fortunate to welcome two new members to the University’s leadership team in 2015—VP for Advancement Jaci Thiede, and VP for Enrollment Management Lori Greene. Jaci and Lori bring significant talent and experience to Butler and I am confident they will help lead their divisions and—in partnership with our existing leadership team—our University to great success in the years to come.

Congratulations also to Chris Holtmann, who was named men’s basketball Head Coach on January 2. Coach Holtmann has done a tremendous job leading the team in recent months and we are confident in his leadership—and that of all athletic coaches and staff—as our Bulldogs complete their second year of BIG EAST competition. We appreciate Brandon Miller’s many contributions to Butler over the last 18 months, and wish him well.

Campus Environment
Following the 2013 completion of the Schrott Center for the Arts and West Campus infrastructure improvements, we made major strides in 2014 toward advancing Butler’s educational mission through superior campus amenities.

In April 2014, the University—in partnership with the City of Indianapolis—broke ground on the Sunset Streetscape Project, intended to beautify the eastern border of Butler’s campus, while improving safety and sustainability. The bulk of the project was completed this fall, with finishing touches scheduled for this spring, prior to Commencement.

In September, we broke ground on a multi-use parking facility that will address long-standing parking concerns and bring new dining and retail options to Butler’s campus. The five-story facility, expected to open in August, will house 1,038 parking spaces and 15,000 square feet of retail space.

Thanks to the generosity of thousands of supporters, the Campaign for Hinkle Fieldhouse formally concluded at the end of 2013 and raised approximately $18 million for the preservation and enhancement of Butler’s 86-year-old national landmark. Renovations—many focused on supporting student-athlete well-being and academic success—were completed in October, in time for the 2014-2015 basketball season. The team did an incredible job maintaining Hinkle’s charm, while providing modern amenities to athletes and fans, alike. If you haven’t yet seen the updates, I encourage you to attend a men’s or women’s basketball game this year.

Also in 2014, the University entered an agreement with American Campus Communities (ACC), a national leader in campus housing, to develop world-class residential facilities to serve the next generation of Butler students. The first phase of development will begin this March, when the University and ACC break ground on a state-of-the-art 630-bed residential facility along Sunset Ave. north of ResCo. This facility, which will also feature a large community space at Sunset and Butler Way, is scheduled to be complete by fall 2016. Planning is underway for future phases of housing development, which will ultimately include the renovation or replacement of beds in Schwitzer, Ross, and ResCo.

For a closer look at the impact these projects will have on Butler’s campus aesthetic, click here. In the long term, these projects are all necessary precursors to planned expansion and modernization of academic spaces. The Science Commission made great progress in 2014 on its recommendations for developing state-of-the-art science facilities in Gallahue and Holcomb, while a new task force began planning for a new academic building to house the College of Business and additional programs.

As Butler builds and grows, we remain committed to sustainability. In August 2014, the University approved and submitted a Climate Action Plan as part of the American Colleges & University Presidents’ Climate Commitment, which we signed in 2012. The plan, which will require extensive collaboration among campus stakeholders, outlines short- and long-term strategies to achieve climate neutrality by 2050.

Final Thoughts
At Butler’s December board meeting, our trustees expressed great confidence and enthusiasm in the University’s vision, strategy, and progress to date. They also acknowledged the significant challenge ahead as we seek to grow and distinguish Butler in the face of demographic and marketplace shifts that will confront higher education in the coming years. I share our trustees’ confidence in Butler’s future, and I am thankful for the great people of Butler—our students, faculty, staff, alumni, and friends—who make this future possible. Thank you again for all you do for Butler University, and I look forward to working alongside you to accomplish great things in 2015 and beyond.