Andres Pena ’15 sat in his Intro to Marketing class at Butler University last year mulling over a prompt: change the world through a mobile device.

Pena considered how the smartphone, with its seemingly endless capability, could be used as a tool to help those in need. He came up with a mobile app that would connect donors to people in developing countries.

“I couldn’t get the idea out of my head,” said Pena, who’s known to his friends as “Dre.” “I just kept thinking about this idea and how much everyone in class had liked it.”

He approached his friend and fellow College of Business classmate Matt Speer ’15, and the two began to conceptualize an app that would allow users to donate money to nonprofit organizations with the touch of a finger.

Two additional business classes in the Entrepreneurship and Innovation program allowed them to further develop and plan what the app might look like.

Over a year and a half later, their idea has become a reality. Speer and Pena launched their smart giving app, rippl, on the App store last week.

The rippl app enables an iPhone user to donate to select nonprofit organizations directly from their phone, similar to the newfound ease of transferring money on a mobile banking app.

“It’s just crazy to me because this idea started in a class exercise,” Pena said. “It’s something that happens every day on a college campus, but we were able to make it happen.”

With the simple tap of the “Give” button, a user can quickly make a donation to one of the nine featured nonprofit organizations: Wheeler Mission Ministries; US Dream Academy; National FFA Foundation; The Julian Center; Jewish Federation of Greater Indianapolis; The Oaks Academy; The Iris Foundation; Butler University Senior Class; and Big Brothers Big Sisters of Central Indiana.

These organizations paid $299 to participate in a two-month trial of the app, which began last week when rippl launched. Speer said the goal of the trial is to prove the value and the worth of the app to investors.

The full version of the app is expected for release next fall if the trial is successful. It would include more nonprofit organizations to choose from and additional app features and abilities, he said.

Deborah Skinner, Associate Professor of Marketing in the College of Business, helped Speer and Pena while they developed the app in her Leadership and Innovation class, a part of the Entrepreneurship curriculum.

She said their passion for the project was infectious, and she felt a strong desire to support them as they navigated building an app from the ground up.

“Although many students might have the capability to pursue a project like this, few jump on and do so with such enthusiasm and dedication,” Skinner said. “Nobody said these guys had to do this. They chose to pursue this idea and to do so with a high level of integrity.” 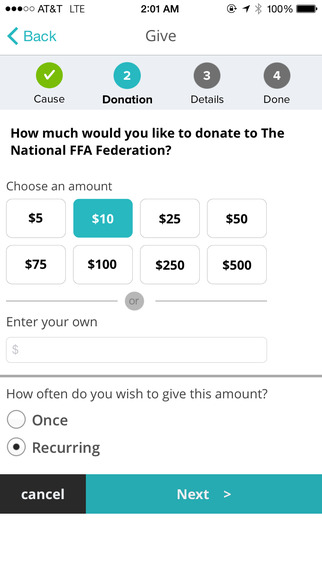 But with the launch of this innovative app, the original question still exists: Why hasn’t a mobile giving app been created before?

Speer said he discovered the answer to that question on what he calls the worst day of his life.

Upon investigating the stipulations of using the App store as a vendor, the duo learned that Apple absorbs 30 percent of a donation if the money is given directly through the app.

“We didn’t think we’d be able to create this app anymore after we did all of this work,” he said. “It was pretty devastating.”

But Speer and Pena solved the challenge: Instead of donating the money through the App store, the donor is directed to an outside web browser that requires them to confirm their selected donation. Once confirmed, the user is brought immediately back into the app.

This process has made Speer and Pena pioneers in the realm of charitable giving.

“Why isn’t the donor the center of the whole process?” Pena said. “If I want to give $20 to, say, the Dream Academy, why can’t I do that quickly over my phone?”

“It cuts down the barriers to donate and makes it simple,” Speer added.

With success now in sight, Speer thinks back to his spur-of-the-moment 2:30 a.m. email to United Way of Central Indiana CEO Ann Murtlow to pitch the app.

Five and a half hours later, he woke to an email from an interested Murtlow. And just like that, rippl became more than just a great idea.

“When you’re presented with an opportunity, you don’t let it slip by,” Speer said. “When Dre told me his idea, I just couldn’t let the opportunity pass me by.”