You Can’t Spell DeGeneres Without DGs 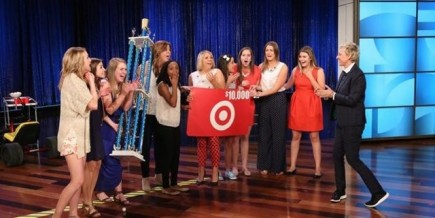 Barely a month after making a Skype phone call to the sorority, DeGeneres flew 10 DGs to Los Angeles to appear on the Thursday, February 12, episode of The Ellen DeGeneres Show. (Watch their segment here.)

But the fun didn’t end with a free vacation and the chance to breathe the same air as DeGeneres on the set of her show.

DeGeneres invited the women to the stage to compete in the Delta Gamma Gameathon, a competition featuring root beer pong and flip cup, dizzy bat, and a tricycle race.

After the second tricycle crossed the finish line, DeGeneres presented the women with a 6-foot trophy—and a $10,000 gift card from Target.

But again, DeGeneres had one more trick up her sleeve.

She invited the women to return to her set next winter to appear on the “12 Days of Giveaways” episode.

“It was a dream come true,” said Nicolle Von Helms ’15, one of the women selected to appear on the show. “Not just for me, for all of us. For Delta Gamma as a whole.”

Von Helms, who had long dreamt of meeting DeGeneres, she said she still is amazed by the generosity and opportunity the talk-show host provided the women of Delta Gamma.

During their January 8 appearance on the show, DeGeneres awarded the sorority a passel of prizes from her “12 Days of Giveaways.” The women donated some of those prizes to local homeless shelters, animal shelters, and to their philanthropy, Service for Sight, at the Indiana School for the Blind & Visually Impaired.