One of the perks of being an MFA student at Butler is meeting renowned visiting writers such as Margaret Atwood, Louise Gluck, Cheryl Strayed, and Jonathan Franzen. In addition to the public readings, students are invited to intimate Q&A sessions and private dinners. Whenever possible, MFA students also get the opportunity to interview writers for Booth, the Butler MFA program’s literary magazine. 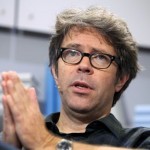 When Franzen came to Butler on October 28, 2014, MFA nonfiction student Susan Lerner interviewed him, and their conversation in Booth kicked up other conversations across the Internet.

Lerner’s story was posted on Friday, February 13, and within eight hours, the interview had generated over 13,000 views. Sites including Salon, Jezebel, Vulture, Huffington Post, Gawker, and Flavorwire all responded to the interview, in which Franzen expressed derision about Young Adult fiction and the work of author Jennifer Weiner.

Lerner is notorious in the program for her preparation and hard work, which paid off in the interview.

“I pretty much abandoned my family for the month before the interview, reading every other interview he’s done and dissecting his work,” she said. “I did my homework and felt really prepared. Otherwise, I wouldn’t have had enough confidence to poke him a bit.”

The students and faculty are proud and impressed with Lerner’s interview. She returns the compliment.

“Nowhere else in the country would an MFA student get this opportunity!” she said, handing out kudos to English Department Chair Andy Levy, MFA Program Chair Hilene Flanzbaum, and the Vivian S. Delbrook Writers Series. She also credited Robert Stapleton, Booth’s Editor-in-Chief, “who had the chutzpah to ask Franzen for an interview (which I don’t think he grants very often) and gave me the gig.”

“He’s the best kind of interviewee,” she said. “He has strong opinions and doesn’t mind being provocative.”