When It Comes to Theatrical Design, He’s All Set

Associate Professor of Theatre Rob Koharchik needed a couple of cartons of Kents, and he needed them fast. But after checking three smoke shops—and being told they’d cost $68 each—he decided to make them himself.

“Just give me a carton of your cheapest cigarettes, and we’ll fake the rest,” said Koharchik, who needed the cigarettes not to smoke but for the packaging—and for the set of Butler Theatre’s latest production, Mad Forest, running through March 1. 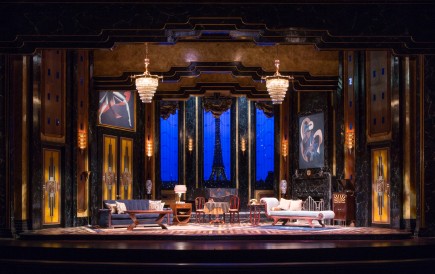 Rob Koharchik’s set from Act 2 of Private Lives at the Walnut Street Theatre in Philadelphia.

Koharchik is the set designer for Butler Theatre, which means he’s in charge of everything from the look of the “room” that’s depicted onstage to what items sit on the coffee table. It’s his responsibility to make the scenes look as realistic—and sometimes surrealistic—as possible. That’s why he specifically wanted Kents—because Mad Forest is set in Romania in 1989, and that was the most in-demand brand there at the time. (He wound up designing his own “Kent” labels to attach to the generics he bought.)

If you’ve seen a Butler Theatre show over the past eight years, or perhaps a production of Shakespeare by the Heartland Actors Repertory Theatre, or something at the Indiana Repertory Theatre, then you’ve probably seen a set Koharchik designed.

Lately, he’s been branching out too. He just put up Noel Coward’s Private Lives, complete with a dazzling “view” of the Eiffel Tower, at Philadelphia’s Walnut Street Theatre. And in late March, his set design will be on display in Rochester, New York, in the Geva Theatre Center production of The Mountaintop, a play described as “a soul-stirring reimagining of Dr. Martin Luther King Jr.’s last night on earth.”

“Rob’s beautiful designs bring to life the script in unique and dynamic ways,” Butler Theatre Department Chair Diane Timmerman said. “He is a master at creating theatrical spaces that honor the particular script and production. What is more, he is an excellent teacher, who is able to give our Butler Theatre students great training in design.”

Koharchik started working in theater in high school and in college at Ball State University. He got a work-study in the scene shop, and, in the spring of his sophomore year, scene design Professor Kip Shawger asked if he wanted to design a set.

“I don’t think I had a plan until that point,” Koharchik said.

He’d taken art classes and thought about architecture, but “theater had scholarship money, and that sealed the deal.” 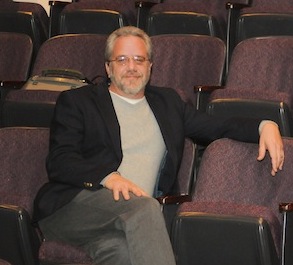 After Ball State, Koharchik went on to do graduate work at Boston University and become a freelance designer. He thought about moving to Los Angeles, but, while driving through Indianapolis in 1994, he stopped to see some friends. They suggested he move here.

He got work in Indianapolis theater, met the woman who would become his wife, Constance Macy, and put down roots. For four years, he taught at Purdue University. Then he came to Butler.

Koharchik, who teaches set and lighting design, said some scripts have detailed passages describing the set—or at least the atmosphere. Others allow the set designer to come up with whatever he can think of. He determines the look by meeting with the director, determining how he or she wants to approach the show, and seeing what the budget is for the set, props, and paint. Smaller companies might only have a few thousand dollars, while larger ones, like Walnut Street in Philadelphia, have many times that.

The bulk of his design work gets done during the summertime—especially the freelance jobs—because “after classes start, it gets harder and harder to find a four-hour block where I can get things done.”