A Study Break “Today,” a Free Florida Vacation This Summer

Butler freshman gets 15 seconds of fame with Kathie Lee and Hoda.

Colton Junod ’18 spends his break from class every weekday at 10 a.m. tuning in to his favorite television program for pop culture—the “Today” show with Kathie Lee Gifford and Hoda Kotb. 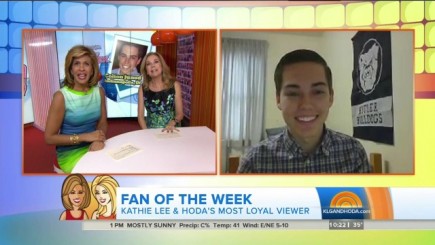 But on Monday, March 23, when he flipped on his dorm room television at the start of the program, he kept the volume off.

That’s because he wasn’t just watching Gifford and Kotb—he was waiting for the producer to count him down for his live Skype appearance on the show as the “Fan of the Week.” (Watch Junod on “Today” here.)

Being “Fan of the Week,” he knew, would require him to answer a trivia question about the show.

“I didn’t tell too many people before, because I was afraid a whole bunch of people would watch and I would get the question wrong,” he said.

To get on the show, Junod, a Biology major, had submitted an application to “Today” with his story and photos of him watching the show.

Two weeks ago, he learned he would appear on the show over Skype to answer a trivia question. The prize for answering the question correctly: an all-expense paid trip to Miami Beach, Florida, for two.

Answer the question incorrectly, and, as Junod said, “it would have been so embarrassing to get it wrong on live TV.” Plus, he could kiss the free vacation goodbye.

But Junod’s consistent viewership paid off, and he correctly identified “Webtastic” as the “Today” segment where Gifford and Kotb share a viral video.

He plans to take his free Florida vacation this summer with either his mom or younger sister.

The trip includes airfare, a three-night and four-day stay at Thompson Miami Beach, dinner for two at Seagrape, and two tickets to the Pérez Art Museum Miami.

Thinking back to the moments before his 15 Skype seconds of fame, Junod laughed as he remembered his last-ditch effort to show off his Bulldog pride on national television.

“I strategically placed a Butler flag on the wall of my room to give us a little press,” Junod said. “Put Butler in the public eye a little more.”