The Butler Collegian won 13 awards for work published in 2014 from the Indiana Collegiate Press Association during the organization’s annual spring convention in Indianapolis Saturday.

The Collegian received awards for the following:

First place for breaking news reporting: Seniors Ben Sieck and Mallory Duncan for “Former Butler student killed by ISIS.” The judge wrote: “Good local reax on what was an international news story. I appreciate the inclusion of the breaking online report, followed by the print story. Nice work tracking down the former professor. Good, fast writing.” 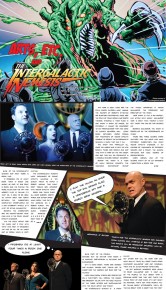 First and second place for non-deadline news story: Marais Jacon-Duffy ’14 and freshman Cassie Eberle for “Former Butler student held captive by ISIS.” The judge wrote: “Excellent story about a Butler alum thrust into the international spotlight. The extensive reporting demonstrated a solid and helpful knowledge of the circumstances surrounding the hostage.” Jacon-Duffy also received second place in the category for “Classification Concerns” of staff, about which the judge wrote:  “A timely story captured the essence of a controversial decision by school administrators and quoted a variety of sourced.”

First place for continuous coverage of a single story: Colin Likas ’14, Jacon-Duffy, senior Julianne Stribiak and sophomore Katie Goodrich for coverage of sexual assault and other sex crimes. The judge’s comment: “There are few more important topics on college campuses than sexual assault and reporting of sex crimes. Kudos to this team for exploring that topic with a mix of enterprise and breaking news reporting. The stories are well-written. I also appreciate the big info-graphic on incidents on campus.”

First place for feature page: For the Jan. 22, 2014, Arts/Etc. section front featuring the story “The Intergalactic Nemesis.” The page was designed by Mallory Duncan, who also wrote the story. Judge’s comment: “An imaginative and dead-on display for the show being previewed. Choice of font is unorthodox but gives it the exact comic book feel that the illustrations also show.”

First and third place for staff editorial: Senior Julian Wyllie won for “A Cloud of Doubt.” Judge’s comment: Selected on the strength of its thorough explanation of the issue of money and athletic programs.” “Managing Hinkles history as renovations roll on,” written by Marko Tomich, received third place.

The Butler Collegian came in third place for Division II Newspaper of the Year, behind The Shield of the University of Southern Indiana and The Torch of Valparaiso University.