Butler University will begin a yearlong program to compost food waste from its dining halls on Tuesdays and Fridays, beginning April 14.

The University has hired the local composting service Green With Indy, which will pick up all compostable waste and bring it to GreenCycle of Indiana, where it will be turned into natural fertilizer. 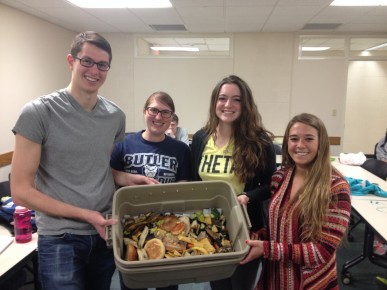 Eric Rupenthal, Lauren Rhoads, Gabrielle Vinyard, and Michelle Okerstrom show off one of the vermi-compost kits they’re making for Butler staff. The students have been bringing in their food waste for the compost kit in Butler’s Center for Urban Ecology.

“It’s a really big deal that we’re composting,” Butler Sustainability Coordinator McKenzie Beverage said. “Not many universities do it. It’s a relatively new thing, and it’s hard to overcome some of the barriers—like funding. We’re lucky because we have these two organizations in town that make it easy for us.”

Students will not have to separate their trash—or do anything different, really. On those two days, the trash cans will be replaced with composting bins.

Students from Beverage’s Sustainability Practicum class will be in the dining areas to provide information about the new program.

According to Greg Walton of Green With Indy, composting has a number of benefits:

-Food waste will be converted to a fertilizer that can used to create healthier, local food sources.

-Pesticides, herbicides and lead in our soil have been linked to developmental issues in children. Composting inactivates these harmful elements.

-Composting eliminates chemical run-off into our rivers, ponds and streams … our sources of drinking water.

The Student Government Association’s Council on Presidential Affairs funded the lion’s share of the one-year contract. Lambda Chi Alpha, which was awarded an SGA grant, also donated to the costs, and a Staff Training and Enrichment Program mini-grant series helped with start-up costs.

During an audit of Butler’s trash in April 2014, Beverage found 600 pounds each of trash, food waste, and recyclables thrown away on just one day. (She plans to conduct another waste audit on April 16 from noon to 2:00 p.m. near Norris Plaza.

For the past year, she has challenged her Sustainability Practicum class to come up with ways for Butler to reduce food waste.

Among the ideas now being put into action:

-Getting students to take a food waste pledge, which includes easy-to-do things like making a grocery list so they don’t overbuy and end throwing food away, and eating leftovers first before they make something new.

-Offering home composting kits to some faculty and staff, including worms to eat through the food waste.

-Creation of a Butler chapter of the Food Recovery Network—the second in Indiana, which collects prepared food that wasn’t eaten and donates it to a shelter.

-Volunteering at the IUPUI Campus Kitchen, where they cook donated food and bring it to shelters.

“My experience with Food Recovery Network has been so rewarding because it has such a powerful mission,” said Lauren Wathen, one of the founding Food Recovery Network chapter members. “Not only does it reduce waste, but also it provides resources for those who need them, and I think that is invaluable.”