To Infinity and Beyond: A Graduate Thesis Composition Goes International

Luke Flynn wanted his thesis composition to be his best. The final score he would compose before receiving his Master of Music Composition in May, he hoped the piece would be a culmination of all he had learned during his time at Butler.

“Starting in late October, until I finished the piece, it was basically my entire life, every single day,” Flynn said. “If I wasn’t in class, I was at home working on it or thinking about it.” 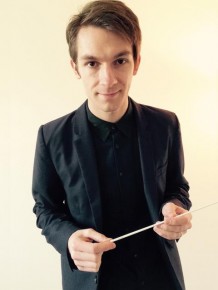 He submitted his composition for the two awards just days after finishing it, and he found out it had been selected by the Sydney Contemporary Orchestra before the end of the week.

“To have instant positive feedback like that, I mean, it was incredible,” he said. “What else could I ask for?”

The Sydney Contemporary Orchestra will perform “Rift” sometime during its 2016 season at either the Sydney Opera House or another city concert venue.

As part of winning the Ablaze Records contest, the Brno Philharmonic in the Czech Republic will record “Rift,” and the piece will appear on the record label’s fourth volume of “Orchestral Masters.”

The sweetener: Flynn will be travelling to Sydney and the Czech Republic when it is performed and recorded to receive some much-deserved recognition.

But in the meantime, he’ll manage to keep himself busy.

Flynn leaves for Lexington, Kentucky, in several weeks in mid-April to teach workshops to youth orchestra members as the winner of the Lexington Philharmonic “New Music Experiment” composition contest.

In June, he’ll jet to New York as one of three finalists in the Young New Yorkers’ Chorus composition competition, in which he was commissioned to compose an original work that will premiere at the chorus concert on June 6.

Through his whirlwind of success, Flynn credits his professors and peers at Butler as influential to his composition style. He singles out his mentor and professor Michael Schelle.

Flynn said “Rift” would have been a different piece without the guidance and encouragement from Schelle to step outside of his comfort zone.

Schelle said Flynn made it easy, coming into the program with the tools for success.

“He arrived to me with passion and curiosity and enthusiasm off the charts,” he said. “He was just ready to try everything, and a composition teacher can’t ask for more than that.”

As Flynn’s time at Butler comes to an end, he plans to take his accomplishments and lessons learned out west to pursue a career in film and videogame score composition in Los Angeles.

Schelle has high aspirations for the young composer, and as he often jokes with Flynn: “I hope he wins the Pulitzer Prize before I do. All I ask is that when he gives his acceptance speech, he thanks me. That’s all I ask.”