For a year—a year!—Joshua LeBar ’99 had to keep a huge secret: He had a small but pivotal role in the first episode of the final season of “Mad Men,” one of TV’s most acclaimed shows.

“I told my mother and my sister, and that’s about it,” he said. “And I wouldn’t let them say anything. I didn’t do any social media even up to the airing of it because I wanted to respect everybody in ‘Mad Men’ and was trying to be a professional about it. It was really hard to keep that secret all this time.” 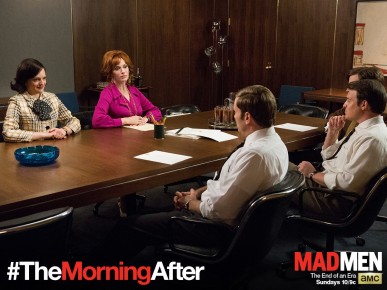 Joshua LeBar ’99 (hand on chin) had a small but pivotal role in the April 5 episode of “Mad Men.”

After the episode aired on April 5, LeBar could finally talk.

In the scene, which was shot in March 2014, Joan (Christina Hendricks) and Peggy (Elisabeth Moss) come to McCann Erickson to ask Will Scully (LeBar) and two of his colleagues to help get their client’s product—pantyhose—into a department store.

Instead of helping, Scully and his colleagues deliver a series of sexually suggestive double entendres to the two women. At one point, Scully says, “Send a basket of pears to Marshall Field’s. One thing Dan likes is a nice pear.”

“My friends say I’m a nice guy, but I also know how to push buttons and twist the knife, so to speak,” LeBar, who was a theatre major at Butler, said with a laugh. “I think that came across.”

He said Matthew Weiner, the show’s creator, worked with him a little. In the early takes, LeBar tried to be understated and subtle and let the words do the work. But as they went on, the director, Scott Hornbacher, asked him to be more overt.

LeBar didn’t know which take they would ultimately use. So seeing it air on Sunday night was an experience.

“I knew Christina and Elisabeth Moss were going to do great jobs because they’re both Grade A actresses, so I wanted to match that level,” he said. “That’s what I felt like when I was working with Jeremy Piven on “Entourage.” Same thing – I’m just trying to match someone who’s winning an Emmy. Working with people who are at the top of their game, it feels like being a worthy tennis player is really the objective.”

LeBar, who played agent Josh Weinstein on “Entourage” from 2004-2008, had auditioned for “Mad Men” twice before. Early on, he auditioned for a scene in which Betty (January Jones) has a fantasy about being with an air-conditioning salesman who comes to her house. A couple of years later, he was close to getting a part as one of two misogynistic guys in an elevator who are told by Don Draper (Jon Hamm) to pipe down.

LeBar, whose next role will be on the TNT cop drama “Major Crimes,” said he was thrilled to land the part. A year ago, he started his own acting studio, Joshua LeBar Studios, and continuing to act just adds to his credibility as a teacher.

And acting on “Mad Men”? Well, that’s about as good as credits get.

“I’m not only an actor but a fan of the show,” he said. “Ten years from now, ‘Mad Men’ will be one of the series that people look back and say it helped define this era of television. It’s so layered and nuanced, like nothing I’ve really experienced before. It was almost like being part of a painting.”