Holocaust Survivor Eva Kor To Class of 2015: Never Give Up

Holocaust survivor Eva Kor advised Butler University’s Class of 2015 on Saturday, May 9, that they should never give up on themselves or their dreams. 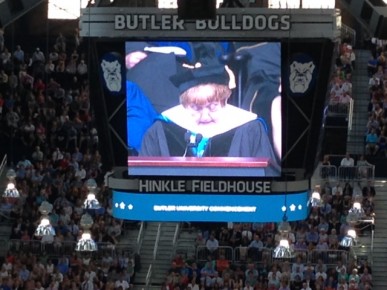 Kor, who spent from May 1944 to January 27, 1945, in the Auschwitz concentration camp, told the 914 graduates and near-capacity crowd at Hinkle Fieldhouse that she was able to endure horrific medical experiments at the hands of Nazi Dr. Josef Mengele because she promised herself “to do anything and everything in my power” to make sure she and her sister, Miriam, survived. (To see the commencement ceremony, go to www.butler.edu/live/.)

In her mind, she said, she pictured how they would look when they finally walked out of the camp.

They dealt with rats, lice, and starvation—both of food and human kindness. She recalled one experiment where Mengele injected her multiple times and she ended up in a hospital. When he saw her there later, he said, “Too bad she’s so young. She only has two weeks to live.”

Kor said that in the years since, she learned to forgive the Nazis as well as “everyone who every hurt me.” She told the story of writing a letter of forgiveness to a Nazi doctor 50 years after the liberation of Auschwitz, which she called “an act of self-healing and self-liberation.”

“Fifty years of pain was lifted from my shoulders,” she said.

Kor also urged the parents of the graduates to “give their children an extra hug and kiss for all the children who have no parents to hug and kiss.” With that, her son Alex, a 1983 Butler graduate, walked over and hugged her.

Kor and longtime Butler benefactor Jean T. Wildman each received honorary doctorates. Wildman, in brief remarks, said that “never in my wildest dreams did I expect to be standing here.” She said she was delighted to have watched Butler grow from a couple of buildings into what it is today.

Abdul-Rahman Peter Kassig, who was murdered by ISIS on November 16, 2014, was awarded a degree posthumously. His parents, Ed and Paula, accepted the diploma on his behalf and received a standing ovation.

The faculty speaker, College of Business Associate Professor of Management Craig Caldwell, told the graduates that money and possessions are not the key to happiness, and he urged them to have empathy and take care of their community.

Class of 2016 President William Grabb described his fellow graduates as “motivated, passionate, and hard-working” students who earned this day.

“You are about to be handed your diploma,” he said. “But you know it was not just handed to you.”