The Center for Urban Ecology Gets a New Director

An interest and expertise in plant ecology has taken Julia Angstmann from Indiana to Manitoba, Canada, to Cape Town, South Africa, and back to Indiana—where she is now the new director of Butler’s Center for Urban Ecology.

“My career has definitely not been a straight line,” Angstmann said. “I have seized opportunities even if I didn’t see directly where they were leading me. Luckily, it has provided me with a wide range of experiences that I can apply to the director position.” 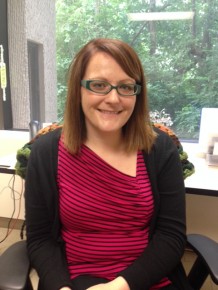 In her new role, she will oversee a center that oversees the CUE Farm and the University’s sustainability efforts. CUE also focuses on the environmental needs and challenges facing the city of Indianapolis.

Angstmann grew up in Marion, Indiana, where she liked to fish, mushroom hunt and spend time outdoors with her father. Students in Marion schools took field trips to Asherwood Nature Preserve to do science projects, and “that definitely impacted me from an early age,” she said.

In her senior year of high school, she job shadowed the director of Asherwood and, once she was accepted to Indiana University-Bloomington, knew she wanted to go into the natural sciences.

Four years later, she earned her doctorate from the University of Wyoming, where she studied water use in trees in the Boreal Forest in northern Manitoba, Canada.

After that, Angstmann wanted to move to an urban environment and gain lab experience, so she did post-doctoral work in Cape Town looking at the deposition of nitrogen from air pollution into their natural environments. There, she became interested in human perceptions of nature.

“A lot of that stemmed from interactions in Manitoba, where people would say it’s negative-50 degrees, so there’s no global warming,” she said. “I realized you can publish as many papers as you want, but if you don’t get society on board, and help educate people on issues facing the natural world, then it’s all for naught.”

When she and her husband, Grant Fore, a social anthropologist, moved back to Indiana in 2012, she took a job at IUPUI as a grant proposal writer, assisting faculty from across the university in writing proposals for external funding.

She said her first order of business in the Center for Urban Ecology is to gauge what’s been done and what needs to be accomplished.

“The center has a lot of accomplishments in community engagement and community outreach with the urban farm and the sustainability efforts on campus,” she said. “They’ve also done really well engaging students. It seems like the traditional scientific research could use an additional boost, so I’m hoping to come in and create some opportunities for the center to collaborate with Butler faculty, in particular, but also the community. The previous efforts of the center have been great. I see my role as focusing some of those efforts.”