Butler Newsroom > Butler Home Page > Dedman Returns to Butler as Associate AD for Communication
Bryan Brenner ’95 Elected to Board of Trustees Ushering in the Indianapolis Bicentennial, With Butler’s Help

Dedman Returns to Butler as Associate AD for Communication

John Dedman, a former Butler student who spent the past nine years on the executive team at Indiana Sports Corp, including the past five as Vice President of Communications, has been named Associate Athletic Director for Communication at Butler University. 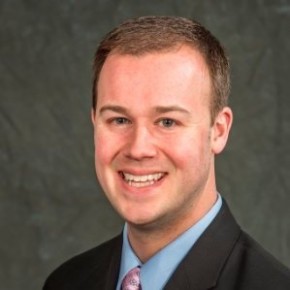 He’ll begin his duties with the Bulldogs on June 29. He’ll be taking over for his former boss, Jim McGrath, who is retiring at the end of June.

“We are very excited to welcome John back to Butler,” said Butler Vice President and Director of Athletics Barry Collier in making the announcement. “John’s skills and experience make him a great fit for our department, and we look forward to having him back on our team.”

A 2003 Butler graduate, Dedman is returning to the department where his career began. He served as assistant sports information director at Butler from 2003 to 2006, handling media relations/communications for nine NCAA Division I sports.

“This is a tremendous opportunity to return to a place that means so much to me,” said Dedman. “Butler has incredible momentum right now and I am honored to be part of the team that will continue this success.”

Dedman rejoins the Bulldogs after serving on the senior leadership group at Indiana Sports Corp, the nation’s first and leading sports commission. In his position as Vice President of Communications, Dedman led public relations and marketing efforts for the organization, served as a spokesperson and facilitated all media requests. He assisted in the creation of the Sports Corp’s Strategic Plan and managed the organization’s branding, external communication plans, creative collateral, advertising buys, social media, weekly e-marketing initiatives and www.IndianaSportsCorp.org.

As a staff member at ISC, Dedman has had a lead role in some of the nation’s major sporting events, including Super Bowl XLVI. He was a member of the Bid Team that brought the event to Indianapolis, and he managed communication efforts for the Super Bowl Village, the outdoor fan festival that brought more than 1.1 million people to the downtown area of the city over the ten days leading up to the Super Bowl. He further assisted with the planning of on-site media operations for the event.

In addition to the Super Bowl, Dedman was actively involved in media operations/communications for the NCAA Division I Men’s Final Four in 2010 and 2015, the 2011 NCAA Division I Women’s Final Four, the NCAA Divison I Men’s Basketball Midwest Regional in 2009, 2013 and 2014, the Big Ten Football Championship Game (2011-14), Big Ten Men’s and Women’s Basketball Tournaments (2008-12, 2014), the U. S. Olympic Diving Trials (2008, 2016), the USA Track and Field Outdoor National Championships (2006, 2007), the USA Gymnastics National Championships (2015) and additional NCAA championship events in lacrosse, swimming and diving and rowing.