Board of Trustees Renews Contract of President James M. Danko

The Butler University Board of Trustees has unanimously voted to renew the contract of President James Danko for another five years, extending his leadership to the year 2020. Although Danko’s contract is not set to expire for another year, the Board determined that securing him now would ensure strategic continuity and maintain Butler’s positive momentum. 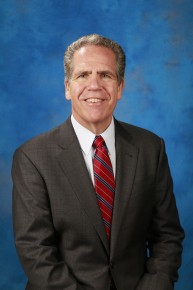 In an announcement to the University community today, Keith Burks, Chair of the Board, said that Danko “has successfully advanced Butler University in a clear and positive direction—one that has provided our learning community with renewed vitality and confidence in the future.”

Since his inauguration in 2011, Danko has engaged the Butler community in the development and implementation of Butler 2020, a progressive strategic plan. He established the Butler Innovation Fund to support creative approaches to teaching, research, and service; partnered with the Christian Theological Seminary to open the Desmond Tutu Center; led Butler’s successful effort to join the BIG EAST Athletic Conference; signed the American Colleges and University Presidents’ Climate Commitment; and oversaw the renovation of buildings including Clowes Memorial Hall and Hinkle Fieldhouse, the beautification of Butler’s main thoroughfare, and the construction of new buildings—including a 600-bed student-housing facility slated to open in 2016.

In keeping with Butler’s commitment to inclusivity, Danko was the first university president in the Hoosier State to publicly denounce Indiana’s Religious Freedom Restoration Act in 2015.

“I feel incredibly privileged to serve as the leader of Butler University, and look forward to the exciting work ahead,” said Danko.

Danko, who earned his degree in religious studies from John Carroll University and an MBA from the University of Michigan, applied his entrepreneurial approach to academic leadership roles at institutions including Dartmouth College and Villanova University before his appointment as Butler’s president.

President Danko and his wife live on campus and frequently open their home to students and their families. He also regularly hosts office hours for students and attends campus events across academic disciplines, the arts, athletics, student life, and service.

“Our community is unique,” he stated. “We not only have world-class faculty, staff, and students who are doing extraordinary things from an academic perspective: we have those same people demonstrating sincere care and respect for those around them within a close-knit residential environment. I can’t imagine a place I’d rather be.”

Keith Burks noted that Danko “has demonstrated the courage to take decisive action, to set and pursue the highest expectations of himself and others, and to take calculated risks.” He added, “His daily approach to presidential service underscores not only his sense of humor and exceptional work ethic, but his care and respect for all members of Butler’s diverse community.”