Elise Kushigian was honored on Friday for her more than 20 years of service as executive director of Clowes Memorial Hall, with Indianapolis Mayor Greg Ballard proclaiming August 7, 2015, “Elise J. Kushigian Day,” and Gov. Mike Pence naming her a Sagamore of the Wabash.

Butler President James M. Danko also weighed in, praising Kushigian for building a strong and lasting legacy of innovative programming, groundbreaking education initiatives, and capital projects that have preserved and enhanced Clowes Memorial Hall for the next generation of Central Indiana audiences. 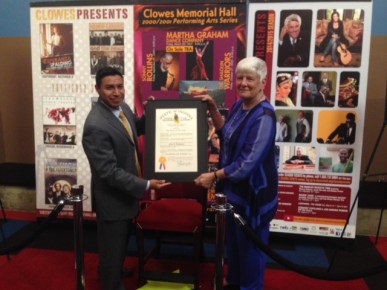 “Elise has made a remarkable impact here,” Danko said. “She has overseen more than 8,000 performances, which averages to nearly eight a week. That is extraordinary. The people of Indiana are richer for the work she has done.”

At a ceremony in—appropriately—the main lobby of Clowes Hall, Kushigian was presented with the Sagamore of the Wabash, the highest honor an Indiana governor can bestow. The award acknowledged Kushigian’s “humanity in living, her loyalty in friendship, her wisdom in council, and her inspiration in leadership.” Past recipients have included astronauts, presidents, ambassadors, artists, musicians, politicians, and ordinary citizens who have contributed greatly to Hoosier heritage.

Ballard’s proclamation noted that Kushigian was named the first female executive director of Clowes Memorial Hall at Butler University in 1995 and oversaw a $4.5 million annual budget. She also administered more than $15 million in restoration grants.

“Elise—self-proclaimed curator of the performing arts—administered the nationally recognized Clowes PreK–12 Education Program, the largest comprehensive arts education program in Indiana, in addition to commissioning new artistic works and collaborating with local arts organizations to stage events,” the proclamation stated. “The City of Indianapolis thanks Elise J. Kushigian for her dedication and leadership in making Clowes Memorial Hall one of the city’s leading venues for learning and entertainment, and wishes her all the best in her much-deserved retirement.” 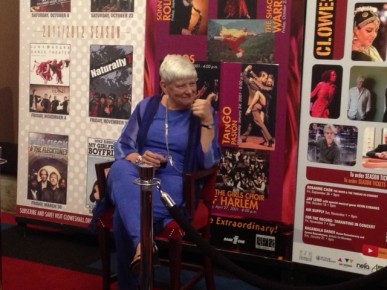 In addition, she was responsible booking agent for such organizations as Radio City Music Hall, The Disney Organization, and the Kennedy Center for the Performing Arts.

Kushigian is a voting participant of the American Theatre Wing’s Tony Awards—the only Tony voter in Indiana—and is currently on the National Legislative Committee for The Broadway League (formally The League of American Theatres and Producers Inc.) as the Indiana representative.

The search for Kushigian’s successor is underway. Karen Steele Cromer will be serving as interim Executive Director.