Meet the New Director of the Center for Faith and Vocation

Daniel Meyers, the new Director of Butler’s Center for Faith and Vocation, faced some tough moments while studying biochemistry at Willamette University.

“Chemistry was always a challenge for me and required tremendous energy; there came a point where I was ready to give up my biochemistry major,” he said. “But I had good advice from my own chaplain at the university, who I talked with about this. He said: ‘Small seasons are small. This moment of frustration and challenge was not your whole time in the sciences and probably won’t continue to be.’ And that was true.” 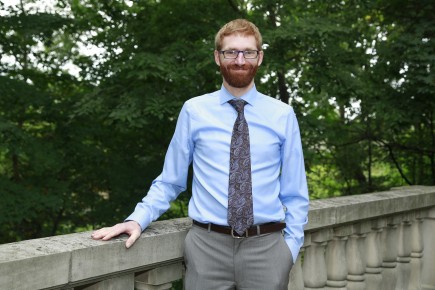 The influence of that chaplain was so significant that Meyers continued his biochemistry major and took on a second major, Religious Studies. In both fields, he found himself asking big questions about how the world works. Or, as he puts it, “two different approaches to similar questions.”

Religion eventually won out in his career plan. And now at Butler, he plans to help coordinate, support, and strengthen religious life on campus while helping people identify their own passions and how those interests connect to their work at the University and beyond.

“What I’m hopefully going to get to do,” he said, “is be involved in both of those distinct but very much wedded-together projects.”

Meyers came to Butler on June 1 from Columbia University, where, for the past two years, he was the inaugural Earl Hall Religious Life Fellow in the Office of the University Chaplain. The Portland, Oregon, native, and his wife, Janna, initially moved to New York after graduation from Willamette. While she studied at Union Theological Seminary, he taught high school chemistry and environmental science in Newark, New Jersey, through Teach for America.

“What I really learned from that whole experience is that teaching is very, very difficult, and you have to be able to connect with the community,” he said. “You have to be present in many ways beyond the classroom.”

In Newark, Meyers also realized that he wanted to focus on chaplaincy rather than leading a parish because he preferred one-on-one, small group dynamics to leading a large community. After three years of teaching, he and Janna moved to Connecticut. He attended Yale Divinity School, earning a Master of Divinity and becoming ordained in the United Church of Christ.

That led to his fellowship at Columbia, where one of his achievements was creating Exhale, a space for student reflection, awareness, and discernment. As that position wound down, he wanted to find a higher education, multi-faith chaplaincy.

Meyers sees his first year at Butler as “largely a listening year.” He’ll hear from students, faculty, staff, and community advisers about where the Center for Faith and Vocation should go as it heads into its second decade. He also will advise “those open to questions and open to seeking.”

“So whether you find yourself in a religious set of commitments or communities, or you’re outside of any particular label but you have questions about meaning and purpose and divinity, those are the kinds of folks I’m excited to be engaging with at Butler,” he said.

He’ll also have a big year personally—Janna is expecting their first child in October.