The new books Human Rights and Universal Child Primary Education and Sponsoring Sufism deal with exceedingly different subjects, but they have this in common: Both came out this summer, and both were written by Butler Assistant Professor of International Studies Fait Muedini. 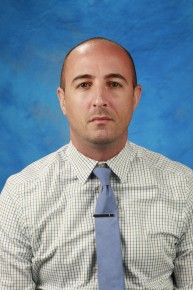 “I am very passionate about human rights and social justice,” Muedini said. “I am driven by what I view as the importance to speak out against injustices, and to find unique ways to work toward the protection of people’s rights.”

Muedini said Human Rights and Universal Child Primary Education came from his dissertation, which he wrote while at the State University of New York at Buffalo. His interest started with a statistic he read—that more than 100 million children around the world do not go to school—and grew from there. (That number is said to be somewhat lower now.)

In the book, he discusses the problem and the reasons for it, what governments and non-governmental organizations are trying to do, what’s working and what isn’t, and what needs to be done.

“Parents have to decide between sending children to school, keeping them home, or sending them to work,” said Muedini, who’s in his second year teaching at Butler. “And if it’s the choice between sending a daughter and sending a son to school, they’ll send the son because he has a better chance of getting a job. This continues to make access to education even harder for girls.”

He said most of the problem is confined to the global south—sub-Saharan Africa, parts of the Middle East, and portions of the world with unstable economies or low employment and high disease rates.

The key to getting more children in school, he said, is ensuring that it’s free. Even in places where there is no charge, there are still costs for uniforms, books, and travel.

“When you read interviews with children, the number one thing they want – over new clothes, over new toys – they wanted to go to school,” Muedini said. “That’s why I decided to focus on this. In addition, the UN and other international organizations have really built in free education as a primary issue. Their goal was to educate all children by 2015. And they’re far from that goal, sadly. There’s an initiative there, but it’s not being met.”

Sponsoring Sufism—the subtitle is How Governments Promote “Mystical Islam” in Their Domestic and Foreign Policies—details how leaders around the world use Sufism to try to tamp down radical Islam.

“Particularly in Muslim-majority states,” Muedini said. “They recognize that Islam is important and people care about it in their society, so they want to promote it. They want to be seen as an ally of Islam. But if they promote it too much, they’re worried it could spark an Islam that they’re not comfortable with—a political Islam that they can’t compete with electorally, such as the Muslim Brotherhood in Egypt.”

He looks at cases in Morocco, Algeria, Pakistan, Russia—and even some movements in United States and Britain trying to promote Sufism. Muedini said authoritarian leaders often need to find an Islam that fits their agenda, an Islam they can promote but is not threatening politically. Sufism is mystical and seen as esoteric. Followers are often perceived—incorrectly, Muedini said—as being more interested in meditating in the forest than they are in politics, he said. So leaders promote this as “the true Islam.”

For his next book, Muedini, who grew up in Detroit (his parents are ethnic Albanian immigrants from western Macedonia), will turn his attention to what non-governmental organizations are doing to promote lesbian-gay-bisexual-transgender-intersex (LGBTI) rights in Turkey and other conservative countries.

“There is no direct common thread between these works and my new project on LGBTI rights,” he said, “but I believe it is essential to speak out for the human rights of all individuals.”