Butler University tied for first place as the Most Innovative School among Midwestern Regional Universities, according to the U.S. News and World Report Best Colleges rankings for 2016. The rating, released today, is the result of voting by college presidents, provosts, and admissions deans, who were asked to nominate the colleges or universities that are making the most innovative improvements in curriculum, faculty, students, campus life, technology, or facilities.

“We added this ranking so that college officials could pick schools that the public should be watching because of the cutting-edge changes being made on their campuses,” the magazine reported. 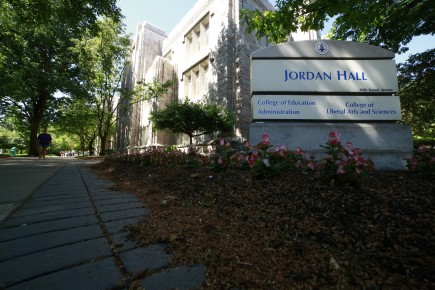 Butler President James M. Danko, who has stressed the importance of innovation since taking over the University four years ago, said that entrepreneurial spirit and commitment to undergraduate, residential education pervade Butler University.

“We are fostering the kind of cross-disciplinary, creative thinking that enriches our campus and serves our students well throughout their lives,” Danko said. “I am pleased to see that other universities have taken note of our efforts.”

Butler also finished No. 7 in the Midwest for Best Undergraduate Teaching, which ranks schools that emphasize undergraduate education, as opposed to the postgraduate research that is a priority at many universities.

And Butler again finished in the Top 15 schools rated a Best Value in the Midwest. This calculation takes into account a school’s academic quality, based on its U.S. News Best Colleges ranking, and the 2014–2015 net cost of attendance for a student who received the average level of need-based financial aid.

Butler also finished among the best schools in four other categories:

-No. 2 overall among Midwest Regional Universities, the sixth consecutive year Butler has received this designation.

-No. 2 in the Midwest under Best Colleges for Veterans—top-ranked schools that offer veterans benefits “that can help them make pursuing a college education more affordable,” according to the magazine.

-One of the nation’s Best Undergraduate Business Programs, based on surveys of business-school deans and senior faculty.

-Again on the list of A+ Schools for B Students—“colleges and universities…where spirit and hard work could make all the difference to the admissions office.”

In addition, U.S. News invited college presidents, chief academic officers, deans of students, and deans of admissions from more than 1,500 schools to nominate stellar examples of “academic programs to look for.” Butler finished among the top schools in the country in the categories of first-year experience (ways to connect first-year with faculty or staff on a regular basis), internships, undergraduate research, service learning, and study abroad.

“These rankings are a testament to our students’ success and to the tireless work of our faculty and staff to engage and support them,” Danko said. “Our academic excellence, innovative approach, and educational outcomes have laid a firm foundation for continued achievement and recognition.”