Chenoweth Was Here, And Butler Singers Were With Her

When Broadway star Kristin Chenoweth needed choral singers for her November 24 performance with the Indianapolis Symphony Orchestra, she did what a number of superstars have done lately—she turned to Butler University.

The result: 10 Butler students sang with Chenoweth on two songs, “Upon This Rock” and “I Was Here,” at the Hilbert Circle Theatre. 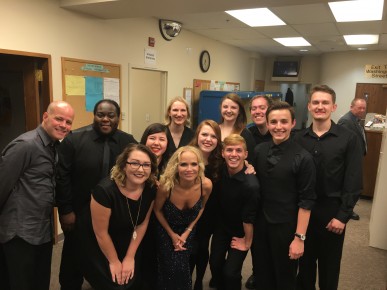 “It’s nice that our students are getting these opportunities,” Butler Director of Choral Activities Eric Stark said. “And in the pop world, there definitely seems to be an increasing awareness of what having a choir onstage brings to a live performance. I think it’s great. More of that would be fine with us.”

Over the past couple of years, Butler students have performed with Madonna (at the 2012 Super Bowl), the Rolling Stones (July 4 at the Indianapolis Motor Speedway), and Stevie Wonder (November 7 at Bankers Life Fieldhouse).

Stark said the appearance with Chenoweth capped a whirlwind five days that went like this:

-November 19: Chenoweth’s musical director contacted the University to see if students would be available. Stark emailed students and found the right mix of voices.

-November 21-22 – Students received PDFs of the music and videos of Chenoweth from YouTube so they could learn the songs.

-November 24: Students rehearsed at Stark’s house in the morning, then with Chenoweth and the orchestra in the afternoon. They performed that night.

Their two songs came at the end of the performance. In between, Chenoweth interviewed each student, getting their name, year, and major.

“She’s a real star and draws all the attention in the room to her—in a good way,” Stark said. “She was so generous to the students.”