Butler Newsroom > Butler Home Page > Home Feature News > Coming Soon to the Sunset Avenue Garage: Pita Pit
Chenoweth Was Here, And Butler Singers Were With Her And Now, Some Parting Words From Your Professors

Pita Pit, “a fresh, healthy alternative to fast food,” will open in late February or early March. The restaurant will seat approximately 20 inside and will have an outdoor patio that will accommodate 20-30. 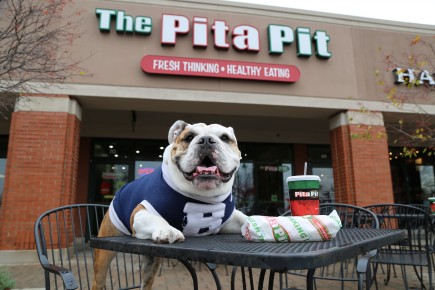 Sealls said Pita Pit will deliver on campus and the surrounding neighborhood. It will be open for lunch and dinner, and offer beer and wine.

“Butler holds a special place in my heart,” he said. “I met my future wife, Whitney ’03, at Butler, and now we have three wonderful kids. From a business standpoint, Pita Pit is a perfect college campus addition. The first Pita Pit was founded at a university. We will offer a quick and healthy alternative to the normal campus culinary scene.”

Sealls, whose degree is in Finance, got into the restaurant business after working as a budget analyst at the University of Albany (New York) while Whitney went to medical school at Albany Medical College. She is now in scientific communications for Eli Lilly and Co. They moved back to Indianapolis in 2008.

Sealls has owned and operated the downtown Indianapolis Pita Pit store since 2009 and was the franchisee of the year in 2013. He also owns another restaurant, Punch Burger, which opened in Indianapolis in 2012 and expanded to Carmel in 2015.

Butler’s new facility, which opened for parking in August, has 17,000 square feet of retail space on the first floor of the five-story structure, as well as 1,033 parking spaces. In August, the University announced that Scotty’s Dawghouse would be the anchor tenant in the garage, taking 6,400 square feet in the northeast corner of Sunset Avenue and Lake Road. Scotty’s is scheduled to open in February.

Pita Pit started in Canada in 1995 and moved into the United States in 1999. Its U.S. headquarters are in Coeur D’Alene, Idaho.

“We’re excited to bring Pita Pit to campus,” Butler Director of External Relations Michael Kaltenmark said. “They are a perfect fit for Butler’s new parking facility, both literally and figuratively. With the ability to occupy an ideal footprint of prominent storefront space along Sunset Avenue, Pita Pit provides the convenience, quality, and variety that Butler’s students, faculty, staff, and neighbors have requested.”