Think You Need an Antibiotic? Her Poster Says Think Again

The Indiana Department of Health will distribute a poster designed by a Butler University student to warn healthcare providers and their patients about the dangers of overprescribing and overusing antibiotics. 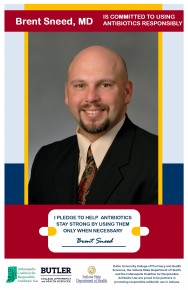 A sample of the poster created by Paige Watkins ’16

The poster, created by senior Pharmacy major Paige Watkins, allows doctors and other pharmaceutical prescribers to post their photo along with a declaration that they are committed to using antibiotics responsibly. Under the picture is a card that says, “I pledge to help antibiotics stay strong by using them only when necessary.”

The poster templates will be distributed as part of the Centers for Disease Control and Prevention’s “Get Smart About Antibiotics Week” November 16–22.

“Antibiotic resistance is one of the biggest health threats we face,” said State Health Commissioner Jerome Adams, M.D., M.P.H. “By prescribing antibiotics responsibly, we can help ensure that patients with bacterial infections have access to effective medications that improve their chances of recovery.”

Watkins, a Grand Rapids, Michigan, native who plans to become a pediatric pharmacist, said the poster began with the work of the Indiana Coalition for Responsible Antibiotic Use. This collaboration of professional and student pharmacists, prescribers, epidemiologists, and others is spreading the message that “using antibiotics correctly is important if we want them to be useful and effective for a long time,” she said. “The more frequently you use them, the quicker they become unusable.” 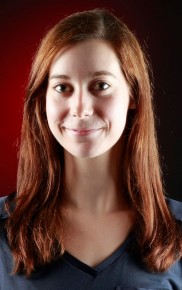 The coalition, started by Butler Pharmacy professors Chad Knoderer and Kristen Nichols in collaboration with Indiana University School of Medicine Professor Elaine Cox, decided on a poster campaign in fall 2014. “We wanted to implement something that would provoke a conversation between prescriber and patient,” Watkins said.

The first poster went up in August at the IU Methodist Family Medicine Center in downtown Indianapolis. The coalition is now beginning to evaluate its effectiveness in raising awareness about overuse of antibiotics.

“I think the poster is a great way to start conversation between prescribers and their patients about what antibiotic resistance is,” Nichols said. “It is important to have this conversation not only when the patient feels that they need an antibiotic.”

This week, the posters will be sent in an email with a blank template. Prescribers can add their face and electronic signature and hang them in their offices.

“I’m very proud of it,” Watkins said. “It snowballed a lot faster than I thought it was going to. Initially, it just started as my research project that every pharmacy student has to do to graduate. But everyone got passionate really quickly, and I have some great mentors in Pharmacy who have helped a lot, as well as some great contacts in the Department of Health. So this spiraled out of control in a good way pretty quickly.”