Shandeep Singh is realizing three dreams for the price of one.

The first is his parents’, who made it clear that they expected him to go to college. 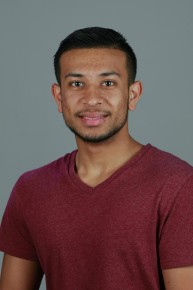 “It was 100 percent I was going to go,” said Singh, a sophomore biology/pre-med and political science double major. “They want to make my life easier, and they know this was the way to go. Nowadays, the more education you have, the better your life is going to be. So that was the main focus for me.”

The other dream is his—to go into medicine, as either an anesthesiologist or cardiologist. That dream became a little easier when he was selected to receive Butler’s Realizing the Dream scholarship, an annual award given to a first-generation student.

Jennifer Griggs, the Director of Butler’s Learning Resource Center, said Singh demonstrates many of the qualities this award is designed to recognize.

“He excels academically and contributes to Butler and the Indianapolis community through many leadership and volunteer activities,” she said. “He has clear goals for his future and is truly an inspiration to anyone who wants to achieve the dream of a college education.”

Singh’s parents grew up in India, married right out of high school, and moved to California when he was 4. Neither went to college.

They moved to Plainfield, Indiana, when Shandeep—nicknamed Sean—was 8, in 2001, and have lived there since. His father owns gas stations; his mother owns and operates a motel.

“It speaks to the amount of opportunities we have in America,” he said. “There’s so much diversity, and that even people like me who were born in India can come here and have a good future. So here I am realizing my dream too.”