At Lab School, 22 Chinese Principals Are Students for a Day

When 22 principals from China’s Zhejiang Province wanted to see how American elementary schools operate, they chose to spend a day at the Butler Lab School, which the University operates in partnership with the Indianapolis Public Schools system.

The Chinese visitors devoted Friday, December 4, to observing how the elementary school at 34th and Meridian streets manages to educate the students without concentrating so much on standardized testing. 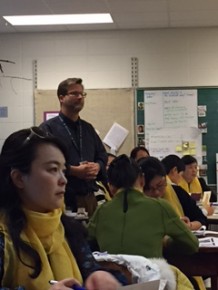 Ron Smith, Principal of the Butler Lab School, visits with counterparts from China.

“In China, they have one curriculum for the entire province,” said Grace Kontur, Program Director for the Indianapolis-based Chinese Education Connection, which coordinated the visit. “Every school teaches the same thing on the same day. So for them to differentiate (like the Lab School does) is a very hard topic for them to understand.”

Kontur left it to Ena Shelley, Dean of Butler’s College of Education and designer of the Lab School, to explain.

With Kontur translating, Shelley told the visitors that “all children are capable, competent, and powerful learners.” It’s up to schools, she said, to “instill a sense of wonder” in the students. “Focus on the strength of the child and build from there,” she said.

In explaining how Lab School learning works, Shelley shared the example of a teacher who showed her student Van Gogh’s painting “Sunflowers” and asked them to draw their own version. That was supplemented by a lesson on Van Gogh, which got the students interested in his painting “Starry Night,” which segued into a discussion of the constellations, which turned into a math lesson about how many stars are in specific constellations, which resulted in a visit to Butler’s Holcomb Observatory to see the stars, which caused one of the English as a Second Language students to start speaking more because he was so excited.

“It opened him up,” Shelley said.

All well and good, the visitors said. But how is student progress evaluated?

Lab School Principal Ron Smith ’88 MS ’96 said student evaluations combine quantitative data—gathered through testing—with qualitative data that measures whether the children have learned. Those qualitative measures include examining student work and recorded discussions with individual students to see what they have learned.

As for teachers, they are evaluated based on formal observations by the principal—that counts for 60 percent—and how the teacher did on goals established at the beginning of the year (40 percent).

This was difficult for the Chinese to understand because they’re accustomed to everything being measured, Kontur said.