They’re not even finished with college yet, but already Joshua Gaal and Tim Valentine are successfully building up Train 918, the video production, marketing, and branding company they founded as sophomores and will run after graduation. 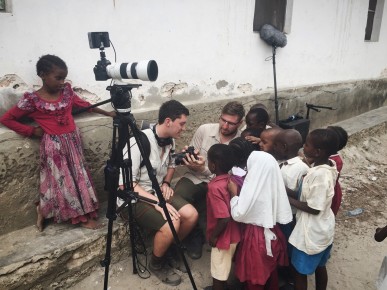 Tim Valentine and Joshua Gaal show their cameras to children in Kenya.

For 10 days in February, the Butler seniors were in Kenya, making promotional videos for a company called Roots Coconut Oil. Their job: show the process of harvesting coconut oil and explain Roots’ focus on providing good wages, clean water initiatives, and more for the Kenyan people. The results will be posted on rootscoconutoil.com this summer.

“Being able to go to Kenya and not be in class for seven days—I’m sure it doesn’t make the professors happy, but they were very understanding,” said Valentine, a Digital Media Production major and Marketing minor from Cincinnati, Ohio.

Gaal and Valentine said the experience was extraordinary. They shot footage on the island of Pate, about 300 miles from the capital city of Nairobi. They didn’t have a lot of downtime, but they managed to see giraffes, a pack of lions, and lush scenery.

Gaal, an Art + Design major and Digital Media Production minor from Whiting, Indiana, said one of the challenges he enjoyed was meeting the children on the island and gaining their trust. 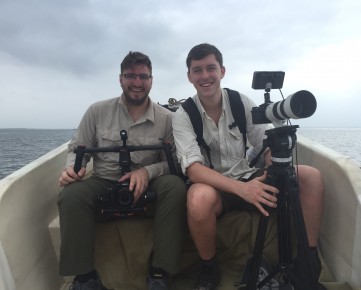 Valentine and Gaal got the job with Roots through a Butler connection—senior Riley Supple, an intern with the coconut oil company, recommended them. He had good reason to: Junior year, Valentine and Gaal worked on an admission video for Butler Marketing that has served as a calling card to attract future business.

The positive reaction to that effort led them to create Train 918, which they named for a train car they rode in as sophomores during a College of Communication trip to Germany.

They followed the admission video this semester with a video for the Butler University Police Department showing the best practices to follow if there’s an active shooter on campus. 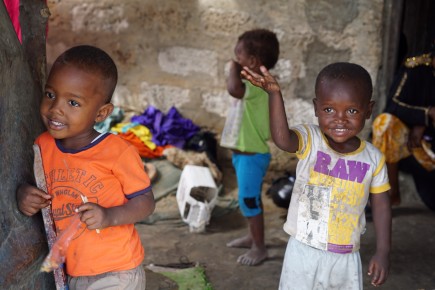 After graduation, Train918 will move into the Speak Easy, a warehouse in Broad Ripple that calls itself “a place for Indy’s entrepreneurial community to call home.”

“I think it’s really cool that Butler University has allowed Josh and me to become who we are and do what we do,” Valentine said. “We’re called Train918, but a lot of our ties are right here with Butler and it’s pretty cool that a university of this size takes care of its students this way.”