On March 9, 2016
Butler senior Kellen Dunham has been named BIG EAST Men’s Basketball Scholar-Athlete of the Year. He was one of four individuals recognized Wednesday at Madison Square Garden in advance of the 2016 BIG EAST Tournament presented by Jeep brand. 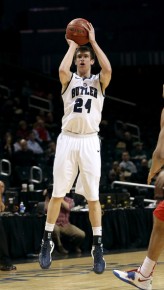 Earlier this week, Dunham received the BIG EAST Sportsmanship Award in a vote of the conference’s coaches. He was also an All-BIG EAST honorable mention selection. Dunham follows former teammate Alex Barlow, who received the Scholar-Athlete Award in both 2013-14 and 2014-15, Butler’s first two seasons in the BIG EAST.
“Kellen exemplifies everything you want in a member of your team,” said Butler coach Chris Holtmann. “He’s a leader and a team-first guy. He brings a positive energy to everything he does, including his work in the classroom. We’ve all seen his accomplishments on the court these last four years, but it’s a tremendous honor for him to be recognized with these Scholar-Athlete and Sportsmanship Awards this week. Kellen is incredibly deserving of this praise.”
The Pendleton, Ind., native is an entrepreneurial and innovation major in Butler’s College of Business. He has received BIG EAST All-Academic Team honors. He has also been named to the Butler Athletic Director’s Honor Roll for multiple semesters.
In BIG EAST games, Dunham led the conference in three-point shooting, making 50 percent from behind the arc. His scoring average in BIG EAST games ranked sixth in the league. During the regular season, Dunham averaged 16.2 points per game (tying for the team lead), made 84 percent of his free throws and added 2.6 rebounds per game. He scored 20 or more points on 10 occasions. With 1,898 career points, Dunham is in fourth place on Butler’s career scoring list. Among active Division I players, Dunham is 14th in career points and tenth in three-pointers made (287 in his career).
Dunham was a first-team All-BIG EAST selection for the 2014-15 season after earning second team honors in 2013-14.
The Scholar-Athlete of the Year Award is chosen by the BIG EAST Academic Affairs Committee.
Recognized along with Dunham at the pre-tournament press conference were BIG EAST Player of the Year Kris Dunn of Providence, Freshman of the Year Henry Ellenson of Marquette, and Co-Coaches of the Year Kevin Willard of Seton Hall and Jay Wright of Villanova.
Butler, which tied for fourth in the BIG EAST regular season, is the fifth seed in this week’s BIG EAST Tournament. The Bulldogs open play Thursday (March 10) against fourth-seeded Providence. The 2:30 p.m. quarterfinal tip will air on FS1.
Media contact:
John Dedman
317-940-9414
jdedman@butler.edu