Butler Partners With Be The Match to Honor Andrew Smith

Butler University has entered into a partnership with Be The Match, which operates the national bone marrow registry, honoring the late Butler Bulldog Andrew Smith, who bravely fought a two-year battle with cancer. As an element of the partnership, Butler’s live bulldog mascot, Blue III (commonly referred to as “Trip”), has been named a national ambassador for Be The Match. 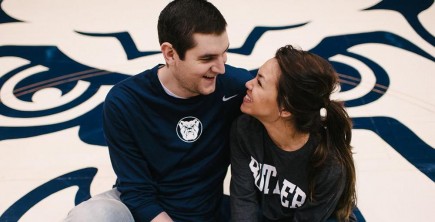 The partnership’s goals are to raise awareness about the registry and add enough members to the Be The Match registry to be the equivalent of saving 44 lives, in honor of Smith who wore #44 during his time at Butler. With a 1:430 ratio of registrants to matches, 18,920 new and available Be The Match registry members are needed to meet this goal.

“What made Andrew special was the way that he genuinely cared for others, and we are proud to be in a position to raise awareness of his behalf,” Butler University Athletics Director Barry Collier said. “In collegiate athletics, we have the opportunity to shape young people’s lives. Through this partnership, we now have the opportunity to save lives as well.”

Every three minutes, someone is diagnosed with leukemia, lymphoma, sickle cell, or another life-threatening blood disease. In some cases, a marrow transplant is the only cure. In 70 percent of cases, no family member is a donor match, so they turn to the Be The Match marrow registry. Nationally, the Be The Match registry has over 13 million members, but it is in desperate need of more young adult members who are available when called up to donate their marrow.

“We applaud and are so very appreciative for the Butler community channeling the wishes of Andrew to help Be The Match save more lives, said Mary Halet, Director of Donor Services at Be The Match. “The effort truly reflects the spirit, kindness and caring for others that Andrew lived his life by every day. We are honored and committed to carry on his legacy to help more patients in need.”

Smith was a beloved member of Butler University’s two-time NCAA Finals men’s basketball team. On January 12, 2016, at the age of 25, he died after a two-year battle with cancer. After being diagnosed, then beating cancer in 2014, Smith’s cancer returned, requiring a bone marrow transplant on October 19, 2015. Throughout his battle, he and his wife, Samantha, worked to raise awareness for the bone marrow registry.

“I am beyond thrilled to see this partnership coming to fruition,” Samantha Smith said. “Andrew would have been so proud and humbled to know his battle would ultimately give rise to much needed awareness of this cause.”

Those interested in learning more about the registry and how to become a member can text “ANDREW” to 38470 or visit join.bethematch.org/Andrew1.

The #9 seed Butler men’s basketball team advanced to the second round of the 2016 NCAA Tournament before its loss to #1 seed University of Virginia on Saturday.