Ysaÿe Barnwell would like everyone to keep calm and sing on. 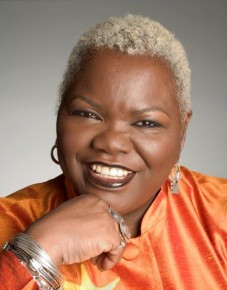 The former member of the a cappella group Sweet Honey in the Rock will be at Butler University’s Schrott Center for the Arts on Sunday, April 17, for an event called Deadline for Choral Peacebuilding. The idea is to bring together choirs from different parts of the globe—in this case, the United Arab Emirates, Brazil, and the United States—to sing together. (Show times and ticket information below.)

Through choral engagement, students participating in the event learn skills that are essential for building peace. The foreign choral experience teaches the Butler students the essentials of peacebuilding, which they use as to be leaders with the high school participants.

“When choirs deal with music from other cultures, it begins to sensitize them to the other cultures,” said Barnwell, who left Sweet Honey three years ago after 34 years in the group. “We can sing with and to each other as a way to understand each other. Community happens around choral singing.”

The idea for the event, which is part of the 2016 Butler ArtsFest, began to take shape when Associate Director of Choir Activities John Perkins asked the Butler University Choir to sing an Arabic song. The students, he said, didn’t connect with the piece very well, “even though it had great meaning and beauty.”

Perkins asked if anyone in the choir knew an Arab. No one did.

“I realized there’s no connection,” he said. “We need to be working on relationship building.  That’s what started my idea for peacebuilding through choral singing. I had been transformed by singing with Middle Easterners for six years, but, only because I knew them.”

A friend recommended that Perkins contact Barnwell, who’s been leading community sings for nearly 30 years at Levine Music, a center for music education in Washington, DC. Barnwell said anybody can show up to sing, and they don’t have to know anything about music.

“I sing to them, they sing back to me, and before the evening is over we have a choir,” she said.

Barnwell employed the same kind of thinking in early February, when she visited Butler for rehearsals. She said singing together is an extraordinarily powerful way to foster peace. And the need for that now is urgent.

“I feel like this is particularly important because I have been hearing people at Black Lives Matter events singing,” she said. “There’s power when you’re standing in front of adversity and you’re saying who you are and what you want through song. It’s not as likely they’re going to bust your head with a billy club if all you’re doing is singing. And if they do, they have to question why. Singing is not threatening the way weapons are.”

Perkins added: “We are not just making peace; we are building it one brick at a time. We’re changing the conversation here, away from division, exclusion, anger, and in some cases violence. This is a joyous but immediate call for looking inward and outward in order to build a new world together.”

Deadline for Choral Peacebuilding
Sunday, April 17, 7:00 PM
Schrott Center for the Arts
Tickets: Public $25, Senior $20, Student $7.50
Tickets available in advance at the Clowes Memorial Hall box office or the evening of the show at the Schrott Center.