Our Risk Management Students: ‘These Guys Are Good’

As consolation prizes go, this one was pretty great. 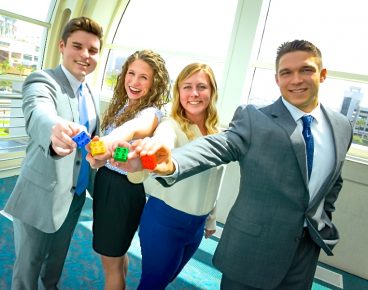 The students were a little disappointed. But afterward, Hans Læssøe, the Risk Manager for Denmark-based Lego, showed them what he had written during their presentation: These guys are good.

“That was an honor in itself,” Bundy said.

To make it as far as they did was impressive. Third place is the best result yet for a Butler team in this competition, and particularly remarkable for a program that’s only in its fourth year.

The Butler team, mentored by Zach Finn, Clinical Professor & Director of the Davey Risk Management and Insurance Program in the College of Business, started in the fall by writing a two-page essay that got them into the competition against 20 other schools. After that, all the teams were assigned to analyze the risk and opportunity that could affect the growth of Lego, which has grown at an annual rate of 16 percent, even during the Great Recession.

Eight teams were chosen to compete in San Diego, where they each gave 20-minute presentations before a panel of judges. Three made it to the finals.

“We were competing against the top programs in the nation and programs that have been around for so much longer than Butler’s,” Pauszek said. “As a program in its fourth year with a max of 40 students or so, we were pretty pleased with how we fared.”

“Butler wants to promote experiential learning, and this is it,” Lakin said. “That’s exactly what we’re doing.”

Butler’s representatives, all Risk Management/Finance double-majors, said their experience gave them the opportunity to network with professionals at the conference and cemented their appreciation for risk management. 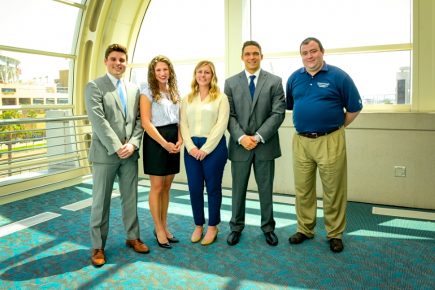 “For me,” Bundy said, “risk management is a different task every day you’re faced with and it’s problem solving, which is fun, in a sense. You also get to help protect people at the same time.”

“I’m a numbers guy, so I love finance,” Doman said. “But risk management allows you to go a lot deeper into those numbers and explain why things are occurring. That’s why I find it interesting.”

The 2017 competition is in Philadelphia, the home of Temple University, which beat Butler and Florida State in this year’s finals. Butler will be back.

“Given that this year’s challenge felt like the Rocky sequel Creed, where the protagonist boxer loses the title but wins the crowd’s hearts, it’s a fitting locale and perfect setup for our return next year,” Finn said.

The students feel the same way.

“Erin and I are juniors,” Pauszek said, “so we’re hoping next year we come back with a vengeance and hopefully get first place next year. That’s the goal.”