Butler Newsroom > Butler Home Page > Home Feature News > Hahn, Pingel Named Most Outstanding Students
Professor Rao’s Artwork Is All Over Indy This Summer Reducing Food Waste Is Their Goal. This Is Their Story.

Rachel Hahn ’16, a Spanish and Communication Sciences and Disorders double-major from Zionsville, Indiana, and Chad Pingel ’16, a Finance and Marketing double-major from Des Moines, Iowa, have been selected as Butler University’s Most Outstanding Female and Male students, respectively. 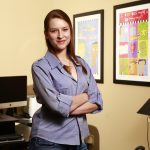 Hahn has a 4.0 grade-point average and achieved seven different academic honors, including being named the Top Student in Communication Sciences and Disorders in 2013, 2014, and 2015. Her activities include participation in Student Government Association (SGA), Fall Alternative Break, and three years as a Resident Assistant. Twice, she was named Most Outstanding Resident Assistant.

Hahn also was selected as Butler’s student Woman of Distinction for 2016.

After graduation, Hahn plans to pursue a Master’s in Speech Language Pathology at Purdue University.

“Rachel is that rare student who seems to be the complete package of what we seek as the ideal student to enter our field and certainly to represent Butler University,” Ann Bilodeau, Clinical Faculty, Director of the Butler Speech and Language Clinic Communication Sciences and Disorders, wrote in recommending Hahn. “I have watched with joy as she continues to grow in her skills each semester and continue to be impressed by her maturity in decision making and her sincere dedication to her own educational development.”

Pingel finishes his Butler career with a 3.92 grade-point average. He earned more than a dozen academic honors, including multiple academic 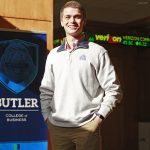 scholarships. He served as President of SGA in 2014-2015, was Director of Academic Affairs for SGA’s Student Initiatives Board, and has worked in the Office of Admissions since 2013. He is an active member of the Delta Tau Delta fraternity.

“Chad utilized a calm, quiet, and collaborative approach to increase campus awareness of Student Government Association, to focus on areas critical to student retention, including awareness and appreciation of diversity, and to develop an organizational commitment to service and volunteerism,” Vice President for Student Affairs Levester Johnson wrote in his recommendation letter.

After graduation, Pingel will work for Google. He will work in People Operations on data analytics, recruiting, and learning & development.

The Outstanding Student Recognition Program seeks those who give unselfishly of themselves, who are highly regarded by the entire university community, and who, as future alumni, may take satisfaction in their contribution and service to Butler University. Some of the criteria that are evaluated include outstanding character, scholarship, engaged citizenship, leadership, and commitment to fostering diversity.