Robert Soltis ’87, who has taught Pharmacology at Drake University since 1992 and is currently the Ellis and Nelle Levitt Distinguished Professor of Pharmacology, will return to Butler University as the new Dean of the College of Pharmacy and Health Sciences (COPHS) beginning June 27. 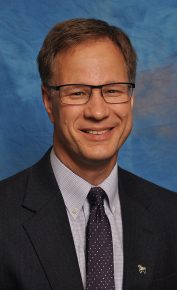 Soltis served as Chair of the Department of Pharmaceutical, Biomedical and Administrative Sciences in Drake’s College of Pharmacy and Health Sciences from 2003-2012 and has been a full Professor since 2007. In 2000-2001, he was a Visiting Scientist at Pioneer Hi-Bred International in Johnston, Iowa.

“When (Butler Dean) Mary Graham told me she was retiring, I thought this would be a great opportunity,” Soltis said. “I’m looking forward to getting back to Butler and working with the faculty and staff in the college.”

During his 24 years at Drake, Soltis was involved in a variety of innovative projects, including leading efforts to renovate lab spaces and developing and implementing a new undergraduate degree in health sciences. In addition, he has been engaged in strategic planning and earned a reputation for being an excellent teacher, scholar, and collaborative, transparent leader. He also served as Faculty Senate president.

“Bob’s significant experience as a faculty member, department chair, and Faculty Senate president at Drake make him an ideal candidate to serve as the next Dean of COPHS,” Butler Provost Kathryn Morris said. “I believe Bob will elevate COPHS from its already strong standing, and he will contribute to the broader academic leadership team at Butler. I look forward to working with him.”

Denise Soltis worked at Drake for several years. She is now pursuing a master’s in Global Health through Northwestern University.

Soltis said that over the years he has kept up with Butler’s College of Pharmacy and Health Sciences through the Dean’s newsletter and alumni events. When he visited to interview for the position, he was “struck by how complete everything seemed.”

“It was a testament to Mary and her administrative team of how well the college is positioned for the future,” he said. “I look forward to moving the college to the next level.”