For nine months beginning in September, Justine Koontz MM ’16 will be living in Riga, Latvia, to determine how “the country that sings” maintains and burnishes that reputation. 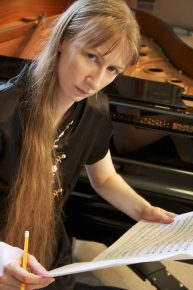 She’ll have this opportunity as a recipient of a prestigious Fulbright award—the third for a Butler student or alumnus this year.

“We know some of their history and some of their music, but we don’t have the story,” Koontz said. “We don’t have the whys. So it’s an ethnographic study to be over there and be a participant in their culture and take note of what is going on. A lot of this will be observation and participation, getting to know people while I’m there and finding out what they have to teach me.”

For Koontz, the idea of traveling began in the middle of spring semester 2015, when she started thinking about what she wanted to do after graduate school. She decided to attend an informational session that Butler’s Center for High Achievement and Scholarly Engagement was holding about Fulbright awards.

She hadn’t studied abroad previously, but the Baltic region caught her attention, and she found the idea of exploring a country with a rich singing tradition appealing.

“They have a massive repertoire of folk songs and really great contemporary composers, yet we don’t program their music that much in the United States,” she said. “And I think that’s because we don’t understand the background of their music. Why are they still singing these songs? Why are these songs so important to them? So part of this is going over there and understanding their culture and their value system and their history as a way to inform our programming here.”

Koontz plans to spend time with professional choirs, university choirs, church choirs, and anyone who can share information about Latvia’s musical culture. Ultimately, she said, this information will be valuable to other choral conductors. She plans to disseminate her findings through the American Choral Directors Association and other organizations for choral conductors. The Fulbright will pay for her travel and living expenses, as well as provide a stipend.

Koontz said the time in Latvia also will allow her to seek some understanding of her upbringing. She grew up in Maryland and had little involvement with choirs until she sang in a choir during her junior year of undergraduate work at McDaniel College in Maryland.

“Singing was not a thing in my family,” she said. “I can’t really imagine a culture where you are expected to sing, where you sing before you talk. That’s something they do naturally.  What is their backstory versus what is mine?”

After graduating from her undergraduate institution, she took four years before starting graduate work. Some of that time was spent at choral conferences, where one of the people she met was longtime Butler Professor Henry Leck. Through her audition at Butler, she met Professor of Music Eric Stark, who became an important mentor while she majored in choral conducting and composition.

“Butler was exactly the right place to be at the right time for me,” she said. “Attending grad school in my own time has allowed me to maximize what I have gotten out of the experience.”