Instead of packing up for college in the weeks leading up to move-in day, incoming first-year student Stephanie Hannon was busy mastering the London Tube System and navigating the streets of Paris. She and six other incoming first-year students were given the opportunity to explore two European cities through Butler’s first International Travel Pre-Orientation program. 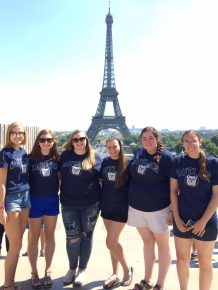 The 10-day program took place in mid-August and was designed to help incoming first-year students build confidence in traveling abroad at the start of their college career. Hannon said she also got to build friendships with some other new Bulldogs.

“I thought it would be cool to meet new people and I’ve never been to Europe,” she said. “I didn’t know too many people coming here and I spent two weeks with these people and now we’re really close.”

Director of Study Abroad Jill McKinney led the inaugural program in coordination with Butler’s new initiative called Themed Living Communities (TLCs). This program lets students choose a TLC that suits their interests and then places them in their on-campus housing unit with students who share similar interests.

McKinney created a TLC called “Go Global!” for students who want to explore cultures around the world and build interest in international travel. In thinking of thematic programming ideas for the “Go Global!” TLC, she came up with the idea to take some of the students on an abroad experience, and the program was born.

The group of students spent half of their time in London and half in Paris. They visited the University of Westminster and the University of Oxford, two schools that they could potentially study abroad at in the future, and they explored major sites including Trafalgar Square, Buckingham Palace, Big Ben, the Eiffel Tower, and the Notre Dame Cathedral.

They also got to meet with Butler alumna Laura Anderson ’15, who was a College of Communication major, studied abroad, and now lives in London. She welcomed the group and spent time advising them on Butler, studying abroad, and post-grad options. 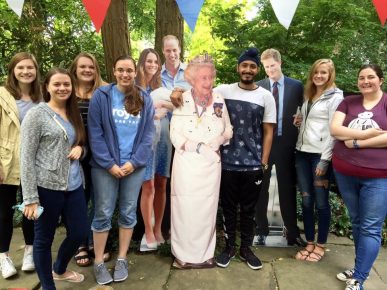 To create the program, McKinney partnered with institutional partner IFSA-Butler, which provides study abroad opportunities for students in multiple countries around the world. The students on the trip were able to meet the IFSA staff in London and learn about the support services the organization provides for American students who are studying abroad.

McKinney believes that the students in the program began to envision themselves in a future study abroad program because of this experience.

“It was most satisfying to hear the students talk about how they now felt more confident to come back to study abroad and even show their own families around London and/or Paris,” McKinney said. “Over the course of 10 days, I watched relatively timid students gain confidence that will inevitably help them navigate this transition to college now as well as study abroad in the future.”