From Fruit Flies to Human Infertility

Assistant Professor of Biology Lindsay Lewellyn has been awarded a $410,656 National Institutes of Health grant to study egg development in fruit flies, which ultimately could lead to breakthroughs in the area of human infertility. 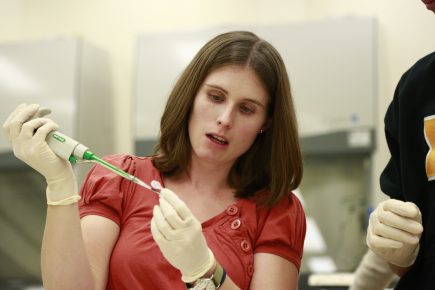 The money for the project, which is officially called “The growth of the germline ring canals during Drosophila melanogaster oogenesis,” will be used to pay for students to work in the lab over the summer, presenting findings at research conferences, hiring a full-time research technician during the academic year, and supplies.

Lewellyn began studying fruit flies in 2010 while doing her post-doctoral research at the University of Chicago. She joined the Butler faculty in fall 2013.

“The big question we’re interested in answering is how does the fruit fly egg develop?” Lewellyn said. “We work on structures called intercellular bridges, which connect the developing oocyte to supporting cells. If the intercellular bridges do not form properly, do not expand, or if they break down, then the flies will be sterile.”

Intercellular bridges are found in organisms from fruit flies to mammals, so “by understanding more about how these structures are formed and how they develop, it could give us insight into potential causes for infertility in humans,” she said.

“Infertility affects millions of Americans each year, and many of the causes are not known. Defects in the formation of sperm and eggs could lead to infertility, so if we can learn more about how sperm and eggs form normally and how intercellular bridges contribute to normal sperm and egg formation, then we could potentially impact the field of infertility.”