A New Director of Admission for Butler? Great Scott!

The first notable thing about Butler’s new Director of Admission is his name—Delorean J. Menifee. Which, you’d think, would result in any number of “Great Scott!”/“1.21 gigawatts”/”Roads? Where we’re going, we don’t need roads” jokes. 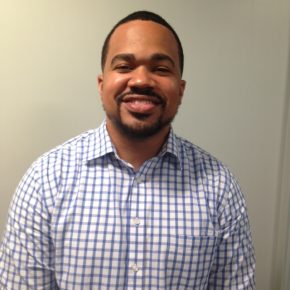 “I’m normally the one who mentions it first to give people a frame of reference for where the name might have come from,” the Anderson, Indiana, native said. “They won’t know how to pronounce it, so I’ll say, ‘Have you ever seen the movie Back to the Future?’ My father to this day still believes that he came up with the name, even though the car was already manufactured before I was born.”

“He brings a background that includes working for many different types of institutions, and professionally he is recognized for his contributions at both the state and national level,” she said. “We are fortunate to have DJ joining us.”

At Lees-McRae, Menifee studied business. In his senior year, he was helping the Chair of the business school make a pitch to the Board of Visitors about how its members could help grow the business program. Menifee didn’t know it, but Lees-McRae’s Vice President of Enrollment Management was in the room.

“Afterwards, I was walking back to my residence hall,” Menifee remembered. “He stopped me and said, ‘Would you like to have an internship in my office?’”

Menifee took the offer. He thought admissions was an interesting field, but he had no intention of pursuing it. But two weeks before graduation, the Vice President of Enrollment Management invited him to take a walk. The walk led to the President’s Office, where they made him a job offer.

Coming to Butler, Menifee said he feels ready to be a Director of Admission. He said over his career, he has learned the team building, strategy, and execution needed to meet enrollment goals. He also wanted to work at a university that valued liberal arts and experiential education.

Menifee described himself as “family-oriented”—he and his wife, Anabel, have an 8-year old daughter, Kaydence, a 3-year-old son, Kyrie, and a new addition to the family to come in the coming weeks. He said the idea of family extends to the team he works with.

“I want to do more than to reach the University’s enrollment goals,” he said. “I want to enrich the team professionally and personally. There may be some learning curves, but I’ll definitely put in the work and do my best to prepare to put Butler and the team I’m working with in the best position to be successful.”